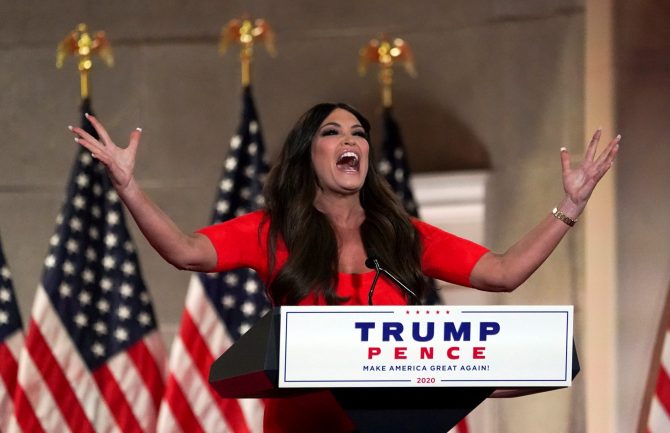 Well, this is kind of a bombshell.

The New Yorker reports that Fox News paid Kimberly “The Best Is Yet To Come” Guilfoyle’s former assistant a whopping $4 million to avoid going to trial after she filed a 42-page complaint accusing Guilfoyle of sexual harassment.

Prior to becoming the Trump campaign’s finance chair, Guilfoyle worked at Fox News from 2006 to 2018, during which time she was a co-host of The Five.

In the summer of 2018, she abruptly left the network. At the time, there were reports of sexual misconduct, but it wasn’t until just this week that all the lurid details spilled out. And they are, indeed, quite lurid.

According to a dozen well-informed sources familiar with her complaints, the assistant alleged that Guilfoyle, her direct supervisor, subjected her frequently to degrading, abusive, and sexually inappropriate behavior; among other things, she said that she was frequently required to work at Guilfoyle’s New York apartment while the Fox host displayed herself naked, and was shown photographs of the genitalia of men with whom Guilfoyle had had sexual relations.

Oh, but that’s just the tip of the iceberg.

The assistant, who was hired in 2015 shortly after graduating from college, claims she was forced to give Guilfoyle massages and critique her naked body, and encouraged to perform sexual favors and sleep with powerful men.

The draft complaint also alleged that Guilfoyle spoke incessantly and luridly about her sex life, and on one occasion demanded a massage of her bare thighs. Other times, she said, Guilfoyle told her to submit to a Fox employee’s demands for sexual favors, encouraged her to sleep with wealthy and powerful men, asked her to critique her naked body, demanded that she share a room with her on business trips, required her to sleep over at her apartment, and exposed herself to her, making her feel deeply uncomfortable.

Guilfoyle, who claims she left the network voluntarily in 2018, is denying the allegations. In a statement, she says, “In my 30-year career working for the SF District Attorney’s Office, the LA District Attorney’s Office, in media and in politics, I have never engaged in any workplace misconduct of any kind. During my career, I have served as a mentor to countless women, with many of whom I remain exceptionally close to this day.”

The Trump campaign declined to comment on the story.