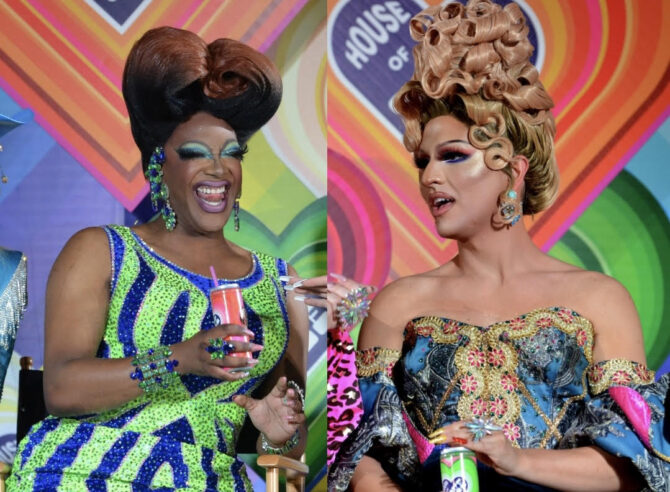 A gay time was had by most at Rupaul’s Dragcon LA this past weekend, but lord knows getting 100+ queens in one place will never be all rhinestones and rose petals. From wig woes to twitter tiffs, here’s the good, the bad, and the “zero beauty” drama from this year’s convention…

Season 2 of Canada’s Drag Race hasn’t had an official cast reunion yet, but nothing has made the case for it like this weekend’s “Bring Back My Girls” panel. Narrator of the season Kimora Amour has hinted to cast tensions in the past, and the beef event horizon was officially reached on Saturday with co-star Adriana.

Adriana made it clear from across the stage that she does NOT want to be close to Kimora while Kimora explained to the crowd the potential anti-Black optics of the situation. An audience member (with an accent akin to Adriana’s) shouted out that Kimora had been cyberbullying Adriana online, though no receipts of this have been found so far. The dispute has continued on Twitter with plenty of she said/they said, and by the looks of it, this may not be the last bout we see from these two.

Serena ChaCha’s wig business has had its share of callouts from customers, ranging from subpar styling to wigs never being delivered at all. Among these customers are other Ru-girls, notably A’keria C. Davenport, who had to personally restyle her ChaCha wig for last year’s All-Stars 6 promos.

In recent months, the callout torch has been carried by instant fan favorite Kornbread “The Snack” Jeté, and she has not let Ms. ChaCha breathe for a minute. Some expected a clash at Dragcon after Kornbread promised to visit Serena’s wig booth, but unfortunately we were all left hanging.

As promised. But to my surprise. She was not there. But the masterpieces were. pic.twitter.com/XWu0uiyOPo

The absolute best reads are the reads that don’t even have to be stated. Kornbread simply posted a video of the wigs available and let the audience decide. We think we’ll do the same.

Gia Gunn vs. just about everyone

Gia Gunn’s mouth can really be the queer news cycle’s best friend. From railing against “messy queens” all those years ago to calling COVID a hoax in 2020, she’s the doll that keeps on giving. Following this year’s Dragcon, she released the following statement online:

Say what you want but I saw 0 beauty at this year’s dragcon…what happened to the glamour? 🤷🏻‍♀️

Addressing a crowd of 100+ of her drag peers as having given zero beauty? Instant content. We could try to list everyone who came out of the woodwork to clapback, but honestly, the list of those who didn’t might be shorter. Instead, here’s a little taste of the highlights:

Now I usually don’t say anything especially when it comes to messy, foolish, and clearly incorrect social media post, but this time Ms @GiaGunn I feel like this is a step too far. As sisters we should build each other up not tear each other down. Until you learn that take a seat https://t.co/IADOPuqzCN

That insecurity is showing…clean it up 👀

When a Beta Bitch that cant put her lashes on correctly,has the nerve to say there was “No Beauty or Glamour “ at Rupauls Dragcon this year…….. You just gotta look at the source , laugh & take it with a grain of salt.😜🤣♥️♥️♥️ Everybody say LOVE ! #RuPaulDragRace

As fun as Rupaul’s Dragcon is, we’ll always enjoy the barrels worth of tea that spills out of it. Let us know if we’ve missed your favorite messy moment from the girls!