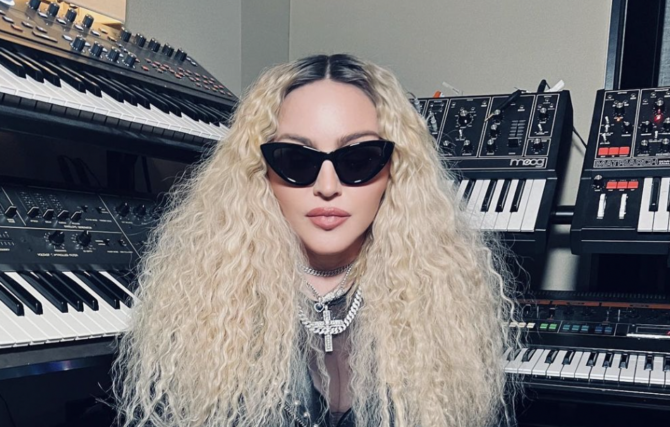 Madonna released her third remix album Finally Enough Love: 50 Number Ones this week. The album marks the singer achieving fifty #1’s on the U.S. Billboard Dance Club Songs chart, more than any other artist in history. Two versions of the remix album will be released–a 16-track abridged edition on June 24, and the full 50-track edition on August 19.

While everyone’s busy celebrating Madge’s U.S. Dance #1’s, we thought it would be fun to look back at her various #2’s. Scroll down for all Madonna’s #2 hits from both the Billboard Hot 100 and U.S. Dance charts ranked…

Though it may be one of her signature songs today, when it was first released in 1984, “Material Girl” failed to reach the #1 position on the Billboard Hot 100, instead peaking at #2. Whomp, whomp. It did, however, top the Dance chart, selling nearly 350,000 copies plus another 450,000 copies overseas. Not the worst consolation prize, if you ask us.

Moving over to the Dance chart for a moment, the third and final single from Hard Candy managed to reach #2 after failing to appear anywhere on the Billboard Hot 100. It might’ve fared better had it been given proper promotion and a music video that wasn’t just a bunch of clips of low-res concert footage spliced together, but Madonna was going through a lot at the time, OK?! She had just turned 50 and she was in the middle of breaking up with Guy Ritchie.

This breezy, feelgood bop was the third single from Like A Prayer. It enjoyed two weeks at #2 on the Billboard Hot 100 but was ultimately denied the #1 spot by Janet’s “Miss You Much.” Perhaps this was the catalyst for their decades-long, still unresolved personal rivalry?

The second single from Who’s That Girl spent three weeks at #2 on the Billboard Hot 100 but was ultimately blocked from the pole position by Michael Jackson’s “Bad” and Tiffany’s “I Think We’re Alone Now,” which feels a little homophobic TBH. In 2022, Madonna re-released the song as a maxi-single on limited edition vinyl for Record Store Day.

Hopping back over to the Dance chart for a sec, the fourth and final single from Bedtime Stories narrowly missed the top spot when it peaked at #2 in 1995. (Sadly, it only hit #46 on the Billboard Hot 100.) Since then, however, the sleek R&B groove has become a staple at Madonna’s live shows and is one of the few songs from her criminally underappreciated sixth studio album that she’s ever performed live.

The lead single from Ray of Light was a major moment in Madge’s career, with the pop icon reinventing herself yet again, this time with producer William Orbit. The dark and moody ballad hit #2 on the Billboard Hot 100 and put the songstress firmly back on the map after taking several years off from music. Last year, a trap remix of the song by Canadian DJ Sickick went viral on TikTok. In response, Madonna released an official video for the remix in March 2022.

Arguably one of her best ballads, “I’ll Remember” peaked at #2 on the Billboard Hot 100. It probably would’ve been #1 if All-4-One’s “I Swear” hadn’t gotten in the way. The song did reach #1 on the Adult Contemporary chart, however, and sold over 1 million copies worldwide, so we’re guessing Madonna wasn’t too upset about it. Honestly, she probably doesn’t even remember.

Now, we know what you’re probably thinking. “Whaaaat?! How did this song not hit #1?!” We don’t know. But it didn’t. The second single from Like A Prayer spent two weeks at #2 on the Billboard Hot 100 before descending down the chart. Even after a $5 million music video, the most expensive ever made at the time, it couldn’t crack that top spot. The Dance chart was another story, however. It spent three weeks at #1 over there.

Subscribe to Queerty for a daily dose of #entertainment #finallyenoughlove:50numberones #madonna stories and more