A licensed attorney in Florida has been suspended from practicing law and fined by the Florida Supreme Court for his anti-LGBTQ and Islamophobic social media posts.

Former Florida lawyer and judicial candidate Donald McBath, 61, actually retired in 2018, but that didn’t stop the Supreme Court from disciplining him over the postings, which date back over the past couple of years.

It has suspended him from practicing law for 91 days and fined him $1,380 for ‘failing to maintain’ the dignity expected of judges and attorneys in the state.

Related: Actor accused of trying to hook up with child claims judge is anti-gay

McBath’s postings to Facebook and Twitter about gay people included: ‘Abstain, if you really have that mental illness. It’s not love.’

In another posting, he said, ‘homosexuality is condemned by Jesus and if the homosexual continues committing that sin of sodomy, his soul faces ETERNAL damnation!’

Lashing out at those defending drag queen story hours for children, he blasted ‘sick queers.’ 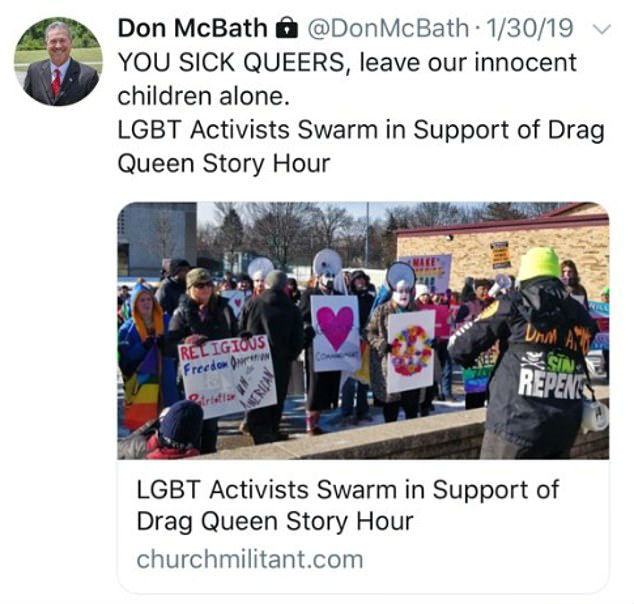 Regarding followers of Islam, he posted: ‘Never trust a Muslim’ and ‘Muslims are deranged.’

When not bashing LGBTQ people and Muslims, McBath posted of his support for Donald Trump and his policies, including his controversial travel ban: ‘They´re leaches on our system,’ posted McBath in support.

McBath, a former US Army major, specialized in family law and divorce law.

In 2018, McBath ran for a judgeship in the Sixth Judicial Circuit, comprising of Pinellas and Pasco counties. He was unsuccessful. However, during his campaign to be elected, he was asked about his social media postings by the Tampa Bay Times.

He told the publication that his views would not hinder him from treating a Muslim or LGBTQ person fairly if they appeared before him in court.

McBath has never denied he made the postings. He has not commented since the Supreme Court issued its ruling, although his Twitter account appeared suspended yesterday.