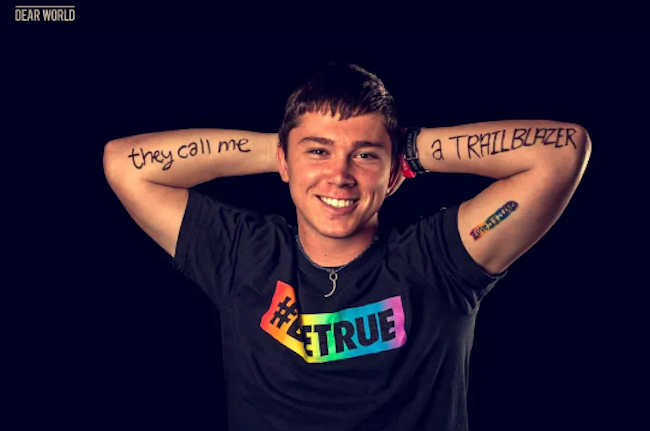 At halftime, while his teammates on the Anahuac High School football team traipsed into the locker room, one student wound back to the other side of the field.

There, still dressed in his football uniform, he applied a touch of makeup and then prepped for the high kicks and splits he was about to perform with the drill team.

Austin Hodges is the only male member on the school’s drill team “which also made me the only gay guy on the team,” he writes.

In an article for Outsports, Hodges writes of his experiences as both a kick-ass football player and a highly dexterous drill team addition:

I could feel the crowed turn their heads as we marched to the sounds of our captain’s whistle. The fans seemed a bit in awe and had no idea what to think seeing a guy out there doing drills. As we got in our formation and waited for the music to start, I was very nervous, but once the music started we got to dancing and my nerves went away. It was an amazing moment.

I would have to say that the best faces to watch were those of the other teams and their parents because they all just realized “the gay kid who wears makeup and does the splits” was kicking their butts on the field — I played both offensive and defensive line — and was going to do it again when halftime was over.

Somewhat surprisingly considering the machismo inherently infused in football culture, his male teammates and teachers have never had a problem with the fact that he’s a member of the drill team.

“I was always welcomed back to the game with support and applause from my teammates and coaches when halftime was over,” he writes.

He hopes his double-duty opened some minds about gender roles and homosexuality:

I was able to show that not only can gay men play sports but that they can also have, for lack of a better word, a “flamboyant” side as well and that it was OK that straight men and gay men can have both sides, that it was OK to be different.

The excellent first-person piece, which really deserves to be viewed in its entirely, can be read here.