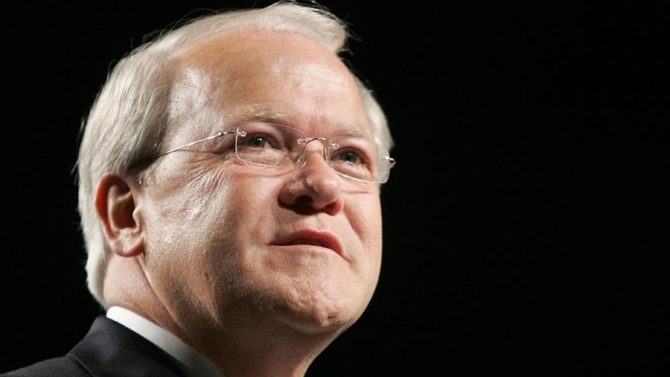 A leading figure in America’s largest Protestant denomination abruptly resigned from his job this week over what he calls a “morally inappropriate relationship in the recent past.”

Frank Page is, er, was the president and chief executive of the Southern Baptist Convention, which consists of more than 47,000 independently operating Baptist churches, with a total membership of more than 16 million people, and an annual budget of nearly $200 million.

The Southern Baptist Convention opposes same-sex marriage, prohibits congregations from blessing same-sex unions or ordaining gay and lesbian clergy, opposes gay-straight alliances in schools, and is against legislation banning discrimination against LGBTQ in the workplace.

On Monday, Page announced his retirement, which took many by surprise. Then on Tuesday, he issued a statement clarifying why he was stepping down, saying it was because of a “personal failing” that has “embarrassed my family, my Lord, myself, and the Kingdom.”

Out of a desire to protect my family and those I have hurt, I initially announced my retirement earlier today without a complete explanation. However, after further wrestling with my personal indiscretion, it became apparent to me that this situation must be acknowledged in a more forthright manner.

But it’s not just Page’s “personal failing” that has people talking. It’s the shroud of mystery that seems to surround it. It’s not clear who the other party in the “morally inappropriate relationship” was, whether they were female… or male.

Naturally, this has a lot of people speculating.

Frank S Page The Pope and CEO of 48,000 Southern Baptist Churches in the USA. WHO HAS dragged the United States people around by its nose on which Republican ONLY to vote for or your not christian. Has resigned due to Homosexual sins he's committed. Gay Man in the Church closet

Stephen Rummage, the SBC’s executive committee’s current chairman, issued a statement over the matter that was also incredibly vague.

Rummage simply said his “heart is broken” for Page, saying he was “personally counting on the prayers of Southern Baptists” to help Page and his family with “the spiritual and emotional support they need in the coming days.”

Related: The 100 largest churches in America are all antigay and almost all run by white dudes