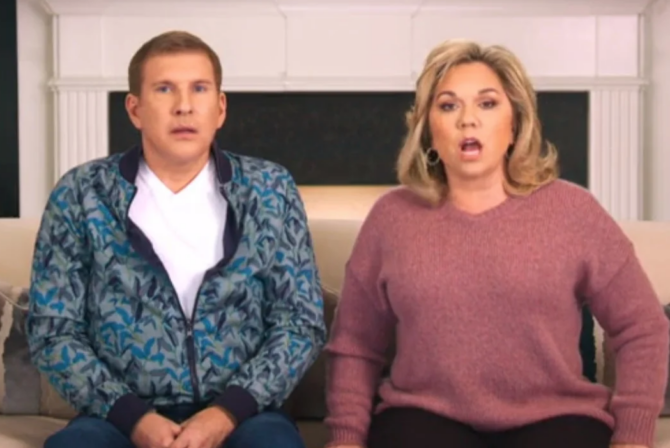 Reality TV stars Todd and Julie Chrisley were found guilty of bank fraud and tax evasion on Tuesday. As part of the trial, longstanding gay rumors about Todd were once again given oxygen.

The stars of the USA show “Chrisley Knows Best,” which has run for ten seasons, were indicted by federal prosecutors in 2019, who alleged the couple “swindled” upwards of $30 million from community banks from 2007 to 2012 by inflating their net worth to secure loans, and specifically targeted smaller banks they knew did less due diligence than larger ones. In 2012, Todd filed for bankruptcy, erasing $20 million in loan debt.

“Prosecuting attorney Annalise Peters alleged they then actively hid millions they made from the reality show, which began in 2014, as well as $500,000 in taxes Todd owed in 2009. They alleged that the couple actively evaded taxes going back to 2009,” reports the Atlanta Journal-Constitution.

Gay rumors have followed Todd for years; in 2014 he chalked them up to his being “proudly flamboyant, unabashedly enthusiastic about fashion,” and, in case you were wondering, he “absolutely went to see Elton John for his 40th birthday.”

During the trial, Mark Braddock, a former business partner of Todd’s, said on the stand that he and Chrisley had an affair and even paid off a blackmailer who allegedly was going to publicly out them.

Chrisley’s lawyer countered that Braddock was simply “obsessed” with the reality star.

For what it’s worth, Braddock is also known to have been the person who initially tipped off the FBI to the Chrisley’s creative accounting after he was fired by the couple in 2012.

In closing arguments, Chrisley’s lawyer called Braddock’s testimony about the affair and the blackmail a “fantasy.”