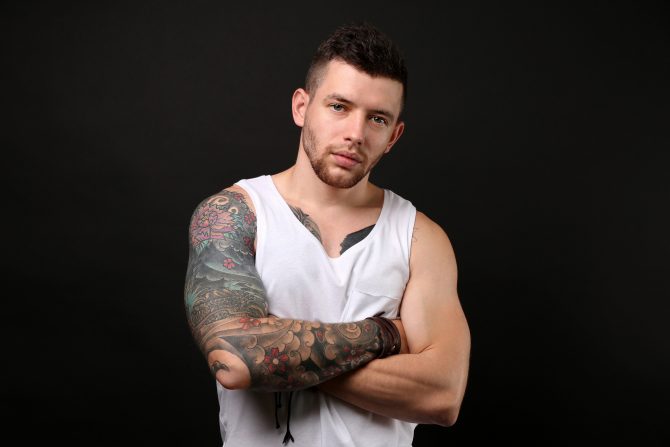 A straight guy seems to have broken the cardinal rule of posting anonymous nudes online: Don’t include identifying features. But you certainly won’t hear his gay friend complaining.

Related: His straight friend “accidentally” sent him a nudie pic… Now what?!

The gay friend writes on Reddit that he had a “brief moment of shookethness” recently when he got together with his straight friend from college, whom he hadn’t seen in six years.

“He is very hetero and truly doesn’t have a bi/gay bone [in] his body but has always been a great ally to me as a gay guy,” he adds. “Anywho, being a gay as I am, I’ve often wondered what he looked like naked and what he was packing… I know, how stereotypical of me.”

The two guys got to talking about tattoos, and the straight friend showed off the ink on his arm. “It hit me as I was looking at it: I’ve seen this tattoo before,” the Redditor writes. “I didn’t think anything about it until I was on the way home, and then the light bulb came on… I’ve [seen] it on Reddit… And the guy who had the tattoo was totally naked just not showing a face.”

Related: When your most private selfies are found by the worst people imaginable

This industrious Redditor had even bookmarked the nude photo — “‘cause it was hot” — so he was able to confirm his suspicions… to a high degree of certainty, at least. “I’m 99% sure that is my friend.”

“I don’t plan to do anything about it because I actually like the guy and don’t want to make things awkward,” he concludes. “But good Lord, am I going to be fantasizing about him now.”