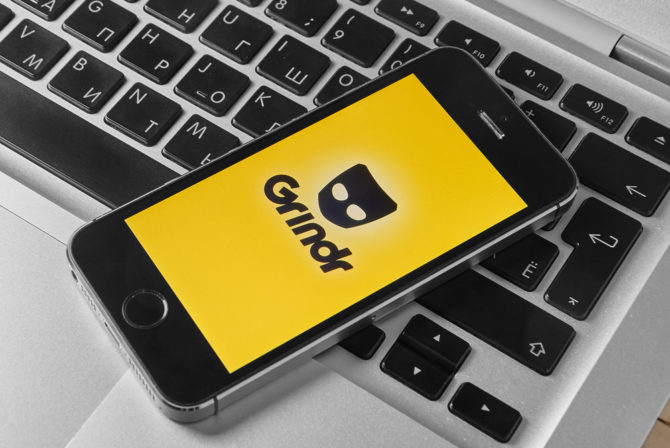 Collin Mims is a young writer for the news site Hilltop Views. He recently penned a thoughtful review of the dating app Grindr.

“Living in a heterosexist society has left generations of disenfranchised, touch-starved LGBT people, myself among them,” he begins. “That being said, there have been efforts made to alleviate these issues, particularly through apps.”

“This is a review of Grindr, one of the most infamous ‘dating’ apps out there.”

OK, great! Now that that’s been made clear, let’s get to Mims’ thoughts on the “infamous dating app.” Spoiler alert: He’s not a fan.

His first issue with it are taps. Mims explains:

These little symbols on a person’s profile allow you to send a flame, a little devil or a speech bubble to a person you might be interested. Respectively, these mean that you find the person hot, you’re interested in a sexual encounter or you want to chat with them.

Taps are problematic, Mims says, because nobody uses them. In fact, a lot of guys actually write on their profiles that they don’t respond to taps. So then what, Mims wonders, is the point of them?

Mims is also not a huge fan of Grindr’s gaymojis:

Speaking of making communication harder, it might be prudent now to talk about gaymojis. As if communication wasn’t messy enough with emojis, Grindr decided to throw its own take into the mix, resulting in a mix of sexually suggestive fruits and veggies, as well as vague gay culture references, including the appropriated phrase “Bye, Felicia.”

The concept of gaymojis is “cute,” Mims says, but “in reality it’s mostly just uncomfortable unless you have a fun rapport with the individual.”

So while I appreciate having so many variations of eggplant available to send to strangers over the internet (to say what, exactly?), the addition is ultimately unnecessary, failing to improve communication or the overall Grindr experience.

The only remotely positive thing Mims has to say about the app is complimenting its inclusion of gender and pronoun identities.

“It’s a small, but appreciated step towards normalizing transmen and non binary individuals into the gay community, as it breaks down the assumption everyone is a cis man,” he says.

But, since no good deed goes unpunished, even that is not without its flaws.

Unfortunately, cis men ruined that one, taking it as an opportunity to label their gender as “tacos” or “fighter jet” or some other endlessly creative way to say “I’m transphobic and don’t consider the plights of transmen to be valid.”

So what’s Mims’ final assessment of the app?

“Grindr takes a step forward and a few steps back, but they’re trying,” he concludes. “Now if only the same could be said for the gay men that use it.”