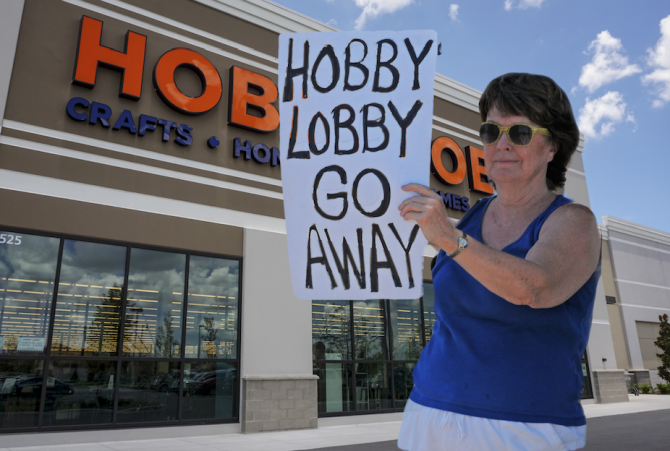 The executives who run Hobby Lobby have many more hobbies than knitting and scrapbooking. Among them are antigay, “Christian” activism and good old-fashioned plundering.

The company’s 2014 win in the Supreme Court opened the door for corporations to discriminate against women and, by Hobby Lobby’s logic, LGBTQ people under the so-called ‘religious freedom’ banner.

The same year, the company acquired the Gilgamesh Dream Tablet, a 3,500 year-old clay tablet that was looted from an Iraqi museum 30 years ago. On Thursday, the artifact will be returned as part of a group of roughly 17,000 artifacts looted from Iraq.

“By returning these illegally acquired objects, the authorities here in the United States and in Iraq are allowing the Iraqi people to reconnect with a page in their history,” UNESCO Director-General Audrey Azoulay said in a statement.

NPR reports the object “features inscriptions in Sumerian, the language of the ancient Mesopotamian civilization. The text includes a section of the epic of Gilgamesh, a poem believed to have been written at least 4,000 years ago.”

Hobby Lobby purchased it from Christie’s at a London auction for $16.7 million. They displayed the stolen, 5×6 inch tablet in the Museum of the Bible in Washington, D.C. — surely what Jesus would have wanted. The company’s owners are also the museum founders.

Both Christie’s and Hobby Lobby claim they weren’t aware the item was stolen, but this is hardly the first time Hobby Lobby has acquired looted artifacts. In 2017, the company paid a $3 million fine to the Justice Department over its sketchy acquisitions and agreed to return thousands of illegally imported clay tablets.

And in March of 2020, Hobby Lobby President Steve Green agreed to return 11,500 objects to Egypt and Iraq.

On the discrimination front, last month an Illinois court determined the company violated state anti-discrimination law when it denied a transgender employee access to the women’s restroom. Transgender rights advocates hope the case has national implications.