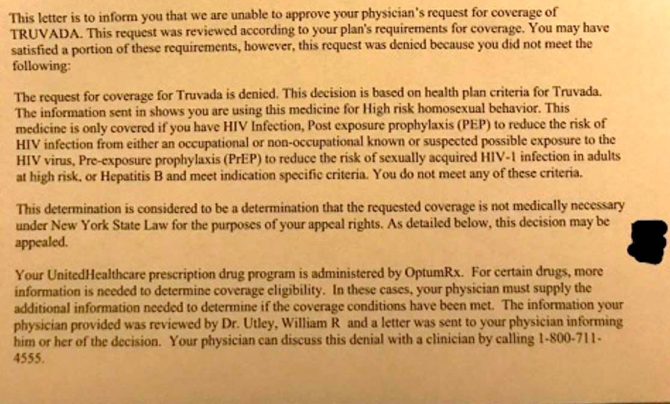 A health insurance provider recently denied HIV medication to a New York man after accusing him of “engaging in high-risk homosexual behavior.”

The letter was sent by United HealthCare, an insurance provider based in Minnetonka, MN, and was posted in a Facebook group for HIV/AIDS awareness.

“This decision is based on health plan criteria for Truvada,” it reads. “The information sent in shows you are using this medicine for engaging in high risk homosexual behavior.”

For whatever reason, the company determined, he did not meet any of those criteria.

Truvada is currently taken by approximately 100,000 patients across the U.S. and has been proven to reduce the risk of HIV infection by 99 percent. Without insurance, it can cost a person up to $1,500 a month out of pocket.

“This was a malicious attempt to discourage PrEP (pre-exposure prophylaxis) uptake by people who need it most,” Jeremiah Johnson of the Treatment Action Group tells Raw Story.

Related: Republicans plan to jack up the price of PrEP because, hey, who needs HIV/AIDS prevention anyway?

Johnson went on to explain that the man appealed the coverage denial, and, after a lengthly back and forth, ultimately got the insurance provider to pay for his drugs, but the experience highlights one of the many hurdles people face when trying to access the medicine.

Patients must also order the drug online and have it delivered by mail, which Johnson says raises privacy concerns. It also requires a complicated medical report be filed four times a year by a patient’s physician.

“This is an enormous barrier for some people,” he says

United HealthCare has declined to comment on the matter.