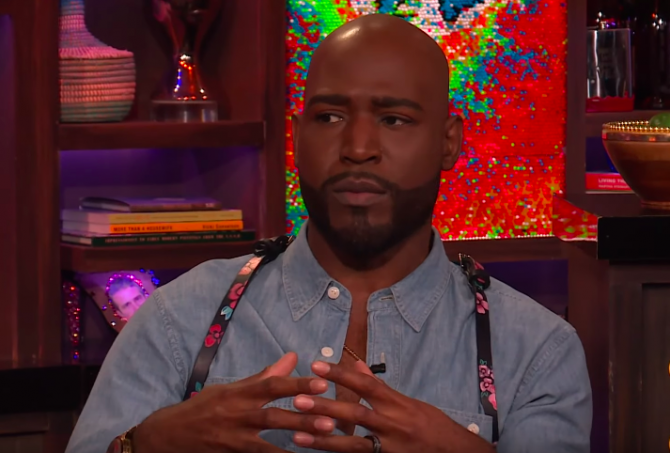 Speaking to reporters after his elimination from Dancing With The Stars on October 28, Brown said, “My goal coming into this was to introduce myself to people who have never seen Queer Eye, to let them know who I am.”

Asked about Spicer, Brown replied, “Through this process, Sean’s trailer has been next to mine and I have literally every day been planting seeds in his heart.”

“And literally, I could see each week those seeds … blossoming and that’s why [when I was sent home] he got emotional,” he continued.

“Sean is literally someone who I would’ve never thought I could be friends with, and I’m going to walk away from here calling him a friend. I’m proud of him. I really am proud of him, because he’s had fun every week and I think he’s exceptional.”

Well, what a difference a week and a half makes!

Cut to last night’s episode of Watch What Happens Live, when Brown basically said the exact opposite of what he said the week before.

“He can’t dance,” Brown told host Andy Cohen. “Middle America watches the show and they vote for him. And also our president, who should be doing other stuff, has been tweeting ‘vote for the man.'”

Jeez. Way to make a blanket statement about all of Middle America, Karamo.

The 38-year-old continued, “I was nice to Sean Spicer. But there was no friendship. I was just saying that, if we’re going to be on the same show, I’m going to have a respectful conversation with someone who’s different from me.”

Evidently, Brown was just kidding when he told reporters he was going to “walk away from here calling [Spicer] a friend.”

As for the harsh criticism he received for praising Spicer earlier in the season, Brown said that was just him being respectful.

“If you’ve never seen me on television, I’m always going to be the person to build a bridge,” Brown explained.