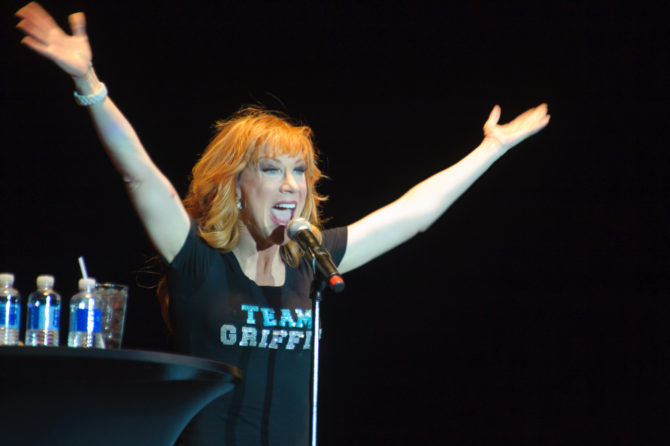 Joking about the image, Griffin apparently said “that she and Tyler would need to move to Mexico once the pics got released.”

Here’s just a small portion of the swift reaction on social media:

This is vile and wrong. It is never funny to joke about killing a president. https://t.co/zIiuKoMyFw

In a publicity stunt era, Kathy Griffin's act breaches all standards of acceptability. Now let's stop giving it the attention she desired.

Our politics have become too base, too low, & too vulgar, but Kathy Griffin's post descends into an even more repugnant & vile territory.

Hey @CNN – will Kathy Griffin be hosting your New Year's Eve show again? Your advertisers would like to know. pic.twitter.com/ngzHbBcPhN

If CNN doesn't completely cut ties with @kathygriffin, it will expose them yet again as a disgraceful network.

Here’s what she had to say via her Facebook page:

Hey everybody, its me Kathy Griffin. I sincerely apologize. I am just now seeing the reaction of these images. I’m a comic; I cross the line; I move the line, then I cross it. I went way too far. The image is too disturbing — I understand how it offends people. It wasn’t funny, I get it. I’ve made a lot of mistakes in my career; I will continue. I ask your forgiveness taking down the image, gonna ask the photographer to take down the image, and I beg for your forgiveness. I went too far. I made a mistake, and I was wrong.

I am sorry. I went too far. I was wrong.

What do you think? Did Kathy cross the line?