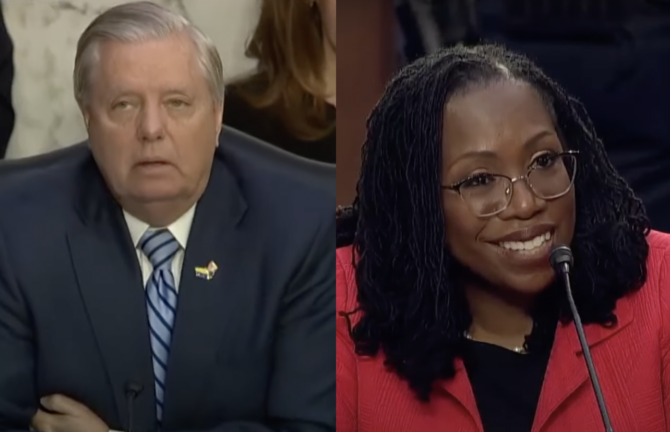 Ketanji Brown Jackson kicked off her second day of Supreme Court nomination hearings today by fielding a line of extremely stupid questioning from none other than Lindsey Graham. The anti-LGBTQ senator grilled the judge about her faith and whether, specifically, she has anything against Catholics.

It started with Graham asking Jackson, “What faith are you, by the way?” When she responded by saying that she’s a non-denominational protestant, he proceeded to ask whether she could “fairly judge a Catholic.”

“Senator, I have a record of fairly judging everyone,” Jackson replied as Graham tried speaking over her.

“I’m just asking this question because, how important is your faith to you?” Graham said.

To which Jackson, looking perplexed, responded, “As you know, there’s no religious test in the Constitution under Article 6 and it’s very important to set aside one’s personal views about things in the role of a judge.”

Graham, who was clearly trying to settle old scores with Democrats over their questioning of Amy Coney Barrett in 2020, pressed on by asking Jackson, “On a scale of 1 to 10, how faithful would you say you are?” Then he inquired about how often she goes to church.

The judge responded by saying, “Well, Senator, I am reluctant to talk about my faith in this way just because I want to be mindful of the need for the public to have confidence in my ability to separate out my personal views.”

A lot of people have been talking about the exchange on Twitter, but our favorite comment has to be from Mary Trump, who remarked: “I know this is an evergreen tweet but Lindsay Graham can f*ck right off.”

I know this is an evergreen tweet but Lindsay Graham can fuck right off.

You should get that embroidered on a pillow

Every time I think of @LindseyGrahamSC I just come back to this. pic.twitter.com/vQExXQTLxD

“On a scale of 1-10 how faithful are you?” An actual question from a U.S. Senator to a potential SCOTUS. Embarrassing.

Seems that the Senate hearing for Ketanji Brown Jackson is more of an opportunity to “soap box” than to question her ability. Because she is so qualified what else can they do? 🤷‍♀️

Lindsay said he goes to church. She should ask him if he adheres to the teachings.

Lindsey Graham doesn’t deserve to have a woman’s first name.

According to live updates by Katie Rogers at the New York Times, after his time was up, Graham “swivels in his chair, grabs his bottle of Coca-Cola, and storms out of the hearing.”

Jackson currently sits on the U.S. Court of Appeals for the District of Columbia Circuit. If confirmed, she will become the first Black woman to serve on the Supreme Court.