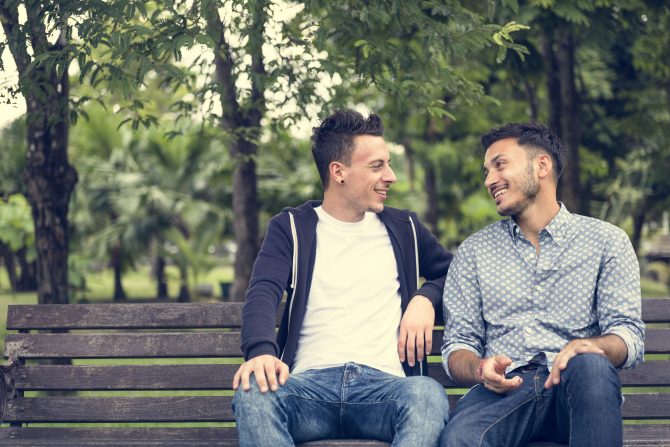 Is your Grindr grounded? Have you had enough of Scruff? Are you feeling hindered by Tinder? Think OkCupid is stupid? Believe it or not, guys don’t need dating apps to find lasting relationships. Or at least…they didn’t before covid up and shut down most of social society.

In a Reddit thread, gay bros recounted the times they met boyfriends and dates offline. Below, edited only for readability, is a selection of responses.

“I met my first boyfriend in junior high, and then after I graduated high school, I would sell him weed, and just by the way he looked at me, I knew we were going to be a couple. And every guy after that I met through mutual friends or music, and my current dude is one of my hair clients.”

“My one gentleman friend I picked up in a bar. Still seeing each other, although it’s been ‘socially distanced’ since March.”

“He was the new guy at work, but we were in different departments, so I didn’t really interact with him. Coworker in a different department who had made friends with him invited him when we were having after-work drinks. It progressed from there. Cue us hooking up in various empty conference rooms and getting in trouble with our respective managers until we broke up.”

“I was a TA for a class, and he hit me up after the class ended.”

“He bummed a cigarette from me behind a dumpster and asked for my number.”

“Bus bench. Took three passes before he’d get in the damn car.”

“Met my first love in university choir. He sat next to me in the tenor section. … Met my third boyfriend on the dance floor of a popular gay club. (Remember those?) I saw him across the room and made up a party to invite him to after dancing. … Sixth boyfriend (second love) was my biological brother’s fraternity little brother. We would make up excuses to talk to each other over and over for months before eventually saying, ‘F*ck it, we’re dating aren’t we?’”

“Bathhouse. Been together 20+ years.”