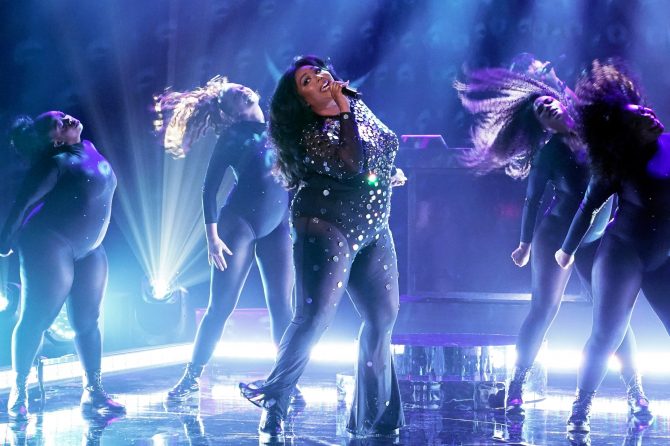 Who she is: Singer, songwriter, rapper.

In April, Lizzo dropped her hotly anticipated, third studio album, Cuz I Love You. The record, jam-packed with fun and inspirational tracks, went on to debut at #6 on the Billboard 200 albums chart and #1 on iTunes, surpassing Beyoncé’s surprise live album Homecoming: The Live Album. The lead single, “Juice,” is upbeat and fun, full of confidence-boosting lyrics. The song received two music videos, one of which features Drag Race alumni dancing and singing along with her.

How she’s contributed: Lizzo creates music that celebrates the beauty of being different. She spreads sex-positivity and body-positivity through her music and her public persona.

Why we’re proud: Fresh off her first Coachella performance and her first MET Gala, Lizzo, born Melissa Viviane Jefferson, is set to take the summer by storm. The 31-year-old singer has been putting out singles like “Good as Hell” and “Truth Hurts” for years before she took to the desert to grace one of the biggest stages in music.

Her work is inspired by the difficulty she felt growing up in a world that told her that she did not fit in. From those experiences and from the lessons she’s learned, she now spreads a message of acceptance and love.

“Every time I rap about being a big girl in a small world,” she told Interview Magazine in 2014, “it’s doing a couple things: It’s empowering my self-awareness, my body image, and it’s also making the statement that we are all bigger than this; we’re a part of something bigger than this, and we should live in each moment knowing that.”

Her message of radical self-love has earned her a huge queer following since coming onto the music scene. She was tapped by Her Highness, RuPaul herself for a guest judge spot for an episode on season 10 of RuPaul’s Drag Race. The self-proclaimed “Lizzbian” performed at NYC Pride in 2018 and is slated to perform at many more Pride festivals this year.

When Teen Vogue asked about her sexuality, Lizzo said that society’s need for a binary has caused her much frustration. “When it comes to sexuality or gender, I personally don’t ascribe to just one thing. I cannot sit here right now and tell you I’m just one thing,” she said. “That’s why the colors for LGBTQ+ are a rainbow! Because there’s a spectrum and right now we try to keep it black and white. That’s just not working for me.”

Lizzo has taken her message of self-love and body positivity on the road for the Cuz I Love You Tour. The tour kicked off in San Francisco in April and is set to finish up right where it started by the end of October.

from the archives
2.3K shares