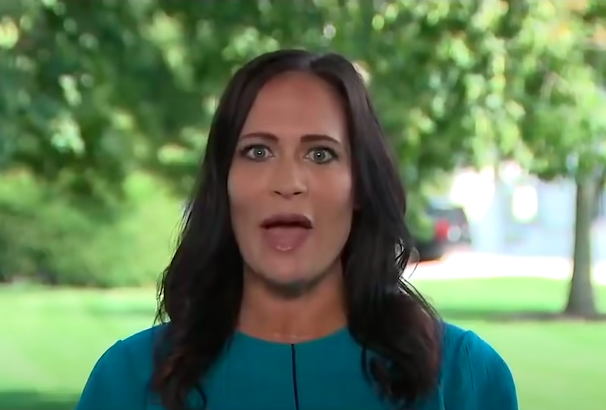 Another day, another tell-all book from a Trump administration insider.

This time, it’s Melania Trump‘s former Chief of Staff and noted drunk driver Stephanie Grisham, who has written a “top-secret memoir” about her four years working in the East Wing.

Grisham’s book is titled I’ll Take Your Questions Now: What I Saw in The Trump White House and, according to an unnamed insider, it promises to deliver all sorts of “surprising new scandals.”

At least, for those who still have the ability to be “surprised” by anything the Trumps say or do.

“Grisham knows where all the bodies are buried because she buried a lot of them herself,” the source tells tells Axios, adding that she “has receipts.”

“She was a press person and it was her job to make sure she knew what was happening.”

Hmmm. That all sounds pretty vague to us.

Hold my Beer while I do the Trump Crate Challenge. pic.twitter.com/AupARvlDi1

Not much is known about the book since it’s been heavily embargoed, which is usually something publishers do when they know a book is crap but they don’t want critics telling everyone before it goes on sale.

According to those who’ve seen the manuscript, however, it does offer a unique insider’s view of some of the biggest tabloid stories to come out of the Trump White House, including the whole Stormy Daniels thing and the personal impact it had on Melania.

“She knows things no one else has been told,” another source adds. “This is a first-person account from someone who heard and saw it all.”

Stephanie Grisham coming out with a book… https://t.co/y7jnV5vchC

Melania, of course, is an intensely private person. Very few people are allowed into her inner circle. Grisham was one of the select few before she quit her job hours after the January 6 insurrection.

Now, according to a former West Wing employee, Trump’s camp is freaking out.

“It’s hard to articulate how much anxiety this is going to cause,” the source says.

I’ll Take Your Questions Now: What I Saw in The Trump White House hits bookstore shelves in October, which means it’ll probably hit the bargain bins by mid-November, just in time for the holidays.