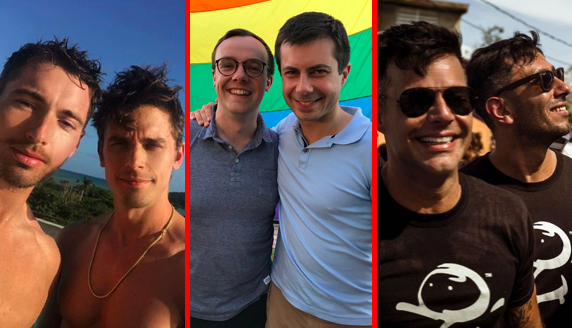 In an interview with Van Jones at CNN last Sunday, 2020 hopeful Pete Buttigieg made a big reveal about how he met his husband, Chasten.

“I met him through this app called Hinge,” the 37-year-old confessed. “As soon as I saw his picture, I saw something in his eyes. I said ‘I gotta meet this guy.’ And then I did.”

Hinge is a free dating app that bills itself as “the dating app for people who want to get off dating apps.” Naturally, it saw a huge uptick in new memberships following Buttigieg’s glowing endorsement.

The Queer Eye co-host and the Flipping Out alum have been dating since last summer but didn’t go public with their relationship until December.

Last month, Porowski revealed exactly how the guys met to Andy Cohen. “We met on Instagram,” he said, proudly. “It’s like, the 2019 way!”

Though they had years earlier, the American Horror Story star reconnected with her now girlfriend Holland Taylor when the 76-year-old slid into her DMs on Twitter.

Speaking to Andy Cohen, Paulson explained, “There was like a Twitter thing that happened. We were doing a thing at Martha Plimpton’s house. It was for an organization that she was working with. And we were both doing a little PSA for it. We breezed by one another and started following each other on Twitter.”

Happy 1 year anniversary babe. I love you so much!

The adorable couple will celebrate two years together in June.

Rippon told Extra last May that he met his tall Finnish boyfriend on Tinder while attending a skating competition in the northern European country in 2017.

Speaking to People about their relationship a few months later, the Olympian added that pair chatted for several months before they started to “hang out a little bit more.”

That was almost a year ago now and the guys are still going strong. In fact, Kajaala recently relocated to Los Angeles to be closer to Rippon.

Speaking to Andy Cohen in 2017, Marin said he first connected with his now-husband, Jwan Yosef, on Instagram.

“I’m scrolling and I see this beautiful piece of art and I’m like, ‘Whoa, how cool! Who’s this?'” he confessed. “Then I start checking and all of a sudden I’m like, ‘Ooh, ooh.’ And then I wrote to him.”

After exchanging messages “about art and life in general” for six months or so, Martin flew to London to meet up with Yosef in person. Less than a year later, they were engaged, and by January 2018 they were married.

And they lived happily ever after.