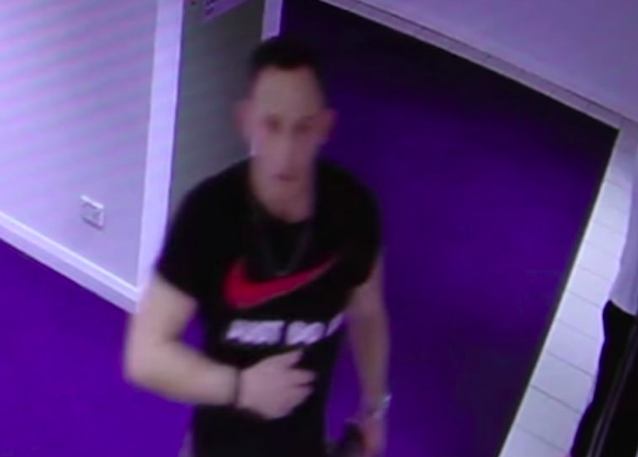 An American man is in critical condition at a hospital in Sydney, Australia after falling from a third floor balcony and impaling himself on a table leg during an alleged hookup.

The 37-year-old American man, whose name has not been released, lives and works in Sydney. On November 4, he invited a man who police describe as  having a “Middle Eastern/Mediterranean appearance with dark hair and a slim build and dark hair” over to his place.

CCTV shows the unidentified man entering the apartment complex carrying just a cellphone. A short while later, he leaves the carrying a black duffle bag.

Police shared the footage on Facebook this week, along with a call for anyone with more information to please come forward.

“We seek the public’s help and assistance to try to establish the person depicted in that imagery,” Detective Superintendent Gavin Wood says.

“That person is a witness. He’s a person that we think can shed significant light on the circumstances around the fall.”

Surry Hills Police Area Commander, Det Supt Gavin Woods, has appealed for public help to ID a potential witness as detectives investigate how a man came to be critically injured after falling three floors off a balcony on 4 November 2018.

For now, police believe the man jumped from the balcony voluntarily and was not pushed, though they still have a lot of unanswered questions.

Wood adds: “For a young 37-year-old man to be in the prime of his life to be in an induced coma in a critical condition in a country he wasn’t born into, it’s horrific in anyone’s language.”

“It’s our job to work hard and establish why it’s happened. But in terms of the enormity of it, I don’t think it gets much worse.”

“Know who you are meeting, where you’re meeting them, what their intentions are and perhaps establish some safeguards beforehand such as providing close friends with those details,” he says.