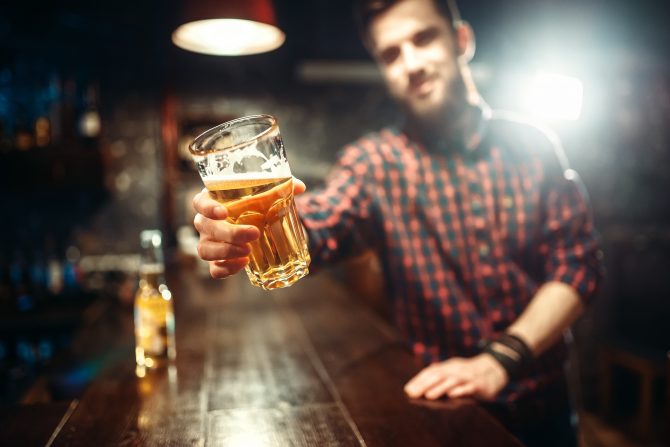 A married father of six in his early 30s says he’s “1,000,000%” straight… most of the time… except when he’s drunk. That’s when he turns into something else. But what? He’s not quite sure. So he’s writing to sex expert Yana Tallon-Hicks in hopes of finding some clarity.

“My wife and I only drink when my mother-in-law is watching the kids for the night,” the 30-year-old writes. “However there’s something we noticed when we’re drunk.”

The man goes on to say that he “absolutely [loves] everything about sex,” as evidenced by the fact that he’s 30 years old with six children.

But get a little booze in his system and that of all changes.

“When I’m drunk I’m down for anything!” the man admits. “Once I’m at that level I literally want vagina, penis, and [all other variations of sexual anatomy.] All of it turns me on super bad and my wife knows this and she thinks it’s sexy.”

Now he wonders: “Am I bisexual? I truly only think those things are sexy when I’m drunk and when I’m sober, it all actually turns me off.”

In her response, Tallon-Hicks cautions the man not to overthink it.

“Gender and sexuality and even sexual anatomy all exist on a spectrum,” she explains. “Meaning, the worries created when we’re taught to think in binary terms like male or female, vagina or penis, gay or straight, are often mitigated by the freedom that can be felt when we just give ourselves permission to be who we are, how we are.”

Her advice? Go with it! Especially since his wife seems to be on board with the whole thing.

“I wonder if part of the reason your sexual desires shift when you’ve been drinking is because alcohol might be granting your brain the permission to venture outside of that worrisome, binary box,” she pontificates.

“I invite you to experiment with giving yourself permission without the drinking to let your desires exist as they are and/or resist the urge to slap a label on yourself if you’re just not sure it fits yet. You’re open with your wife about these desires, she’s into it, you’re not hurting anyone — if it’s not broken, do you have to fix it?”

The bottom line, she says, is that he’s in control of his own identity.

“You get to name your identity however you’d like to. You can still identify as straight and have or even act on these desires. You can identify as bisexual if you’d like to — I don’t get to decide that for you. Know that if/when you do decide to re-label your sexuality, a community exists to welcome you whether that’s online or IRL.”