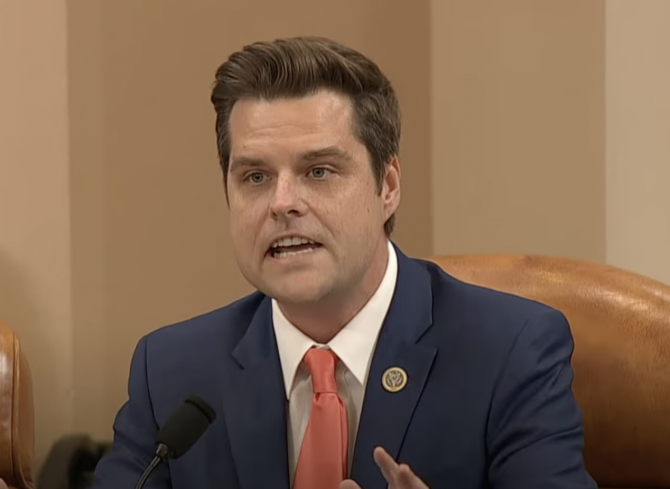 According to a recent report from Florida Politics, Gaetz’s campaign has been burning through cash since that whole teen sex trafficking scandal exploded in the spring.

Now, a new poll of likely voters in Florida’s 1st Congressional District has found that his Democratic challenger, Rebekah Jones, is within “striking distance” of beating him, if the election were held today.

The poll was conducted by The Listener Group and found that Gaetz’s popularity is in a freefall. Of the 532 people surveyed, less than 50% said they viewed him favorably, marking the first time he’s dropped below the 50% line in two years. Meanwhile, over 30% view him either unfavorably or very unfavorably.

As for Jones, her popularity appears to be on the up and up, which is actually kind of crazy given her alleged criminal past, which includes charges of stalking, felony robbery, trespass, criminal mischief, and contempt of court in one case, battery on a police officer and resisting arrest in another, and computer hacking in a third. Jones has denied any wrongdoing in all of the cases.

Also crazy are some of Jones’ campaign platforms. She claims to be both pro-LGBTQ and pro-religious freedom, two things that many consider to be diametrically opposed. She also says she is for smaller government, despite being a Democrat.

Regardless, pollsters found that, if the election were held today, 34% of voters would cast their ballots for her, and fewer than 42% would vote for Gaetz. Meanwhile, 24% of voters are still undecided. That puts Jones within 8 percentage points of unseating the three-term incumbent, with plenty of votes still up for grabs.

An eight-point spread may still be a lot of ground to secure, especially for a Democrat and first-time candidate running in Pensacola. But pollsters say she actually holds a lead in two of the three counties within the district. It’s a rule of thumb in politics that incumbents seeking reelection want to poll above 50%. For Gaetz, these latest numbers indicate remarkable vulnerability.

But it’s not just Jones who Gaetz needs to keep an eye on. Not one, not two, but three different Republicans appear to be eyeing his House seat and laying the groundwork to mount primary challenges against him.