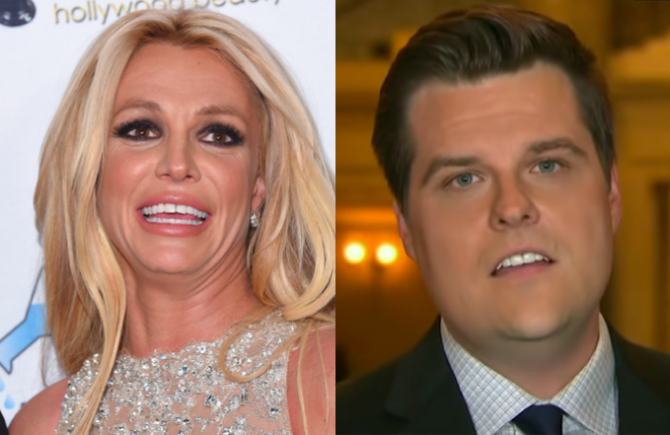 Rep. Matt Gaetz of Florida has made it his personal mission to use his position in Congress to find a way to free Britney Spears.

Today, the 38-year-old homophobe urged his Twitter followers to call Rep. Jerry Nadler of New York, who serves as Chair of the House Judiciary, and urge him to #FreeBritney.

We need a hearing on this. #FreeBritney https://t.co/f7sjjGb3Nh

Last week, he went on Newsmax to talk about how, as a “Millennial and a huge Britney Spears fan,” he feels compelled do something. And he told TMZ he really, really, really wants to bring the singer to Capitol Hill to  speak her truth before Congress.

He’s also been tweeting and retweeting incessantly about her over the past few weeks. Here’s just a a few examples (there are many, many more)…

We can do good for millions of Americans and can absolutely #FreeBritney.

You have the power and can use it to help the vulnerable.

Is there a greater example of Abuser Pathology than Jamie Spears? #FreeBritney https://t.co/Yk1VsaAYyC

I think we struck a nerve.@RepJerryNadler must convene a hearing on Conservatorship & Due Process ASAP!#FreeBritney https://t.co/UYXT8EuYy6

This is what James Spears wants to control.

Congress can #FreeBritney and @RepJerryNadler has the power to convene a needed hearing on conservatorship due process. https://t.co/vLBrHGvbWC

Seriously, this dude is obsessed.

Find something to occupy yourself, aside from this cringeworthy white-knighting on Twitter.

We need a hearing on Nestor’s freedom.

I would say, we need elected officials with a better set of priorities

I’ll say it again. She isn’t going to sleep with you, matt.

Dude you are not doing your job

No jobs at Fox, so interviewing with E!…

It’s a little unsettling that a grown ass man has a fetish with Brittney pic.twitter.com/mU7oDS33xc