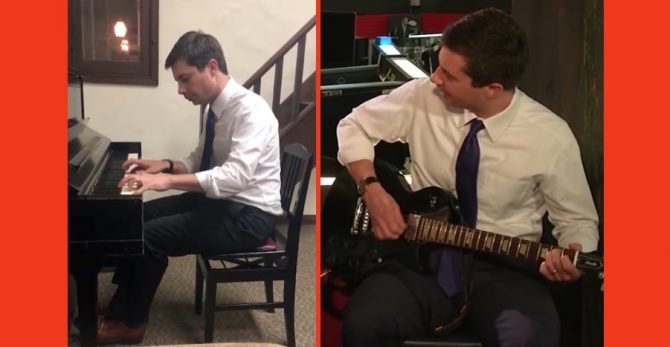 Mayor Pete has some tricks up his sleeve.

As Pete Buttigieg‘s profile as a 2020 Democratic presidential candidate continues to rise, you can see the PR gears churning in real-time.

It’s not enough these days to simply be “qualified” to occupy the Oval Office, what voters really need is pizazz!

So what if you think you can talk down foreign leaders from the brink of war in the most complicated geopolitical chess game of human existence. Everyone can do that.

Can you tap into the electric current of harmonic ecstasy? Can you be a Rock God and shred your melodic truth down from Mount Olympus?

Mayor Pete can… sort of.

While there are certainly lots of folks looking to restore some intellectual integrity to the executive branch — and by all accounts, openly gay Mayor Pete has that to offer — the cult of personality is a powerful beast.

And Buttigieg’s musical skills are already being presented as a showing of broad relatability.

We first saw the band Spoon fawn on Facebook that “this guy can just do everyone’s job, huh”:

So this guy can just do everyone's job, huhPiano: Pete ButtigiegVideo: Lis Smith

“Are you kidding me? This guy! He may have just won me over,” wrote one commenter, and the sentiment was echoed hundreds of times.

And here he is playing some Jimi Hendrix on TMZ this week:

We love a talent show, truly, but we also love serious debates on the harrowing issues facing humanity.

Here’s hoping there’s room for the latter as the 2020 election machine becomes sentient and takes on a life of its own. We’ll just go ahead and buckle our seatbelts now.