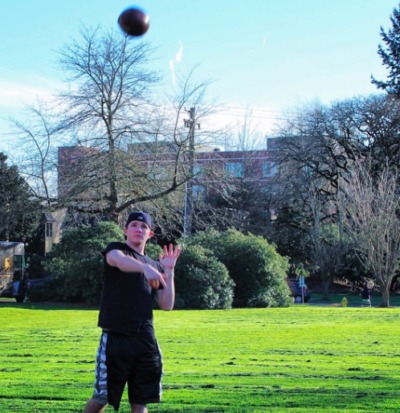 This profile is one of a series of posts about young LGBTQ activists out to make change in the 2018 Queerties category Up & Coming.

Meet Conner Mertens, the Washington-born college football player with a million-dollar smile, powerful leg and a whole lot of courage.

Conner made headlines in 2014 when he became the first college football player to come out. Mertens identifies as bisexual, and when he addressed the subject publicly, he generated international headlines–and met with a cruel blow back from some longtime friends.

Mertens grew up Washington, and showed an early interest in drama and sports. As a young student, he faced a good deal of bigotry for his interest in the fine arts. After getting bullied and teased, Mertens concentrated on athletics and earned notice as a soccer and football player.

Related: How two college swimmers helped each other come out

During high school, he also became an active member of Young Life, a Christian organization for teens. Young Life banned Mertens when he came out but there was no stopping Conner, who simply redoubled his activist efforts and finding time for a boyfriend–college baseball player Chandler Whitney.

Throughout his college career, Conner traveled the nation raising awareness for suicide prevention, anti-bullying efforts, and the power of sports to create positive change in our communities. Since graduating, he’s joined the boards for The Trevor Project, The You Can Play Project and The Sport Equality Foundation. He also started his own non-profit advocacy group, Out on the Streets, aimed at helping homeless LGBTQ youth across the US. He’s also lobbied politicians in his native Washington for increased funds to promote good mental health.

In other words, the man has legs.

Vote for Conner in the 2018 Queerty Awards here.