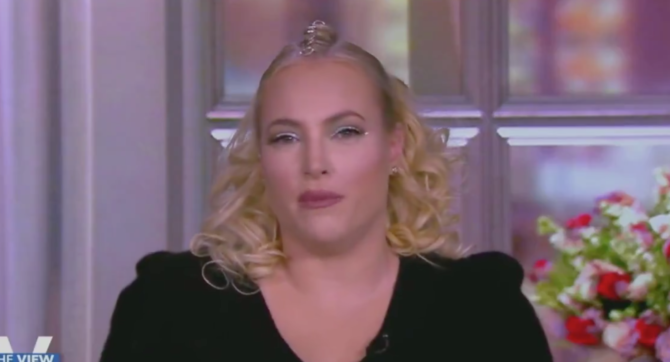 Shortly after issuing an apology for “aiding the agenda” of racist rhetoric towards Asian Americans, Meghan McCain is back on The View questioning the “qualifications” of Asian American workers. She just can’t seem to help herself.

Neither can her hairstylist, but we won’t even get into that here.

During a segment on Wednesday, McCain bemoaned the financial relief provided to Black farmers in the recently passed American Rescue Plan.

“We’re going to a place where even if people need money, even if people are qualified to get into Ivy Leagues, race and gender is more important than your skill qualifications, the content of your character,” she said. “It is not what Martin Luther King Jr. preached. I think this is a very, very slippery slope.”

“I think this is just the natural progression of identity politics,” she continued. “The View is 25 years old next year. We’ve only had one Asian American host co-host this show. So does that mean that one of us should be leaving at some point because there’s not enough representation?”

“We’re talking about is identity politics more important than qualifications for a job? And I think that’s a question going forward that the progressive left is going to have to reconcile.”

Watch the video and see what people are saying below:

Meghan McCain: "We’ve only had one Asian American host co-host host this show. Does that mean one of us should be leaving because there’s not enough representation? We're talking about — is identity politics more important than the qualifications for the job?" pic.twitter.com/0nN1ilB9Nn

Other than being the Princess of Arizona, of course.

Is she volunteering to leave? Alex Wagner would make a nice fit to the show.

Well she is qualified to wear ridiculous hair styles.

Omg! Lisa Ling was 10x’s more qualified than Meghan to be on The View.

Interesting. If that’s the case – is name recognition more important than job qualifications? @MeghanMcCain got famous from blogging about her Dad’s presidential run. No prior media experience before.

What are the qualifications for being a host of the View? Asides from being the daughter of a war criminals and consistently having the dumbest opinions in America

And just what exactly are @MeghanMcCain qualifications to host anything. Awesome self own there shoulder pads.

“Obviously I’m qualified, do you know who my daddy is?”

“If more Asians had dads who ran for President, we’d hire them.”

The makeup artist may harbor some resentment too.