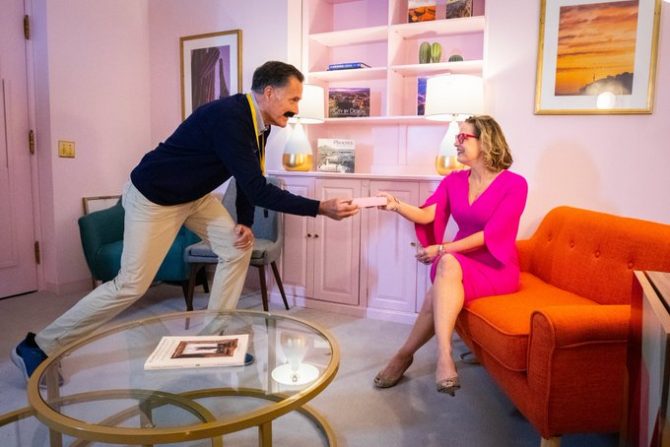 The “tough cookie” remark seems to be in response to the heat the Sinema has been receiving from Democrats in recent weeks for opposing President Biden’s domestic agenda for seemingly no reason, ignoring her own advisors, refusing to talk to colleagues or constituents, and generally stirring up chaos and confusion.

Chaos isn’t a bad way to describe her impact in Washington right now; she’s not only holding up her own party’s biggest national priority, but she’s famously unclear about her reasons why. Joe Manchin (W.Va.), the other most-intransigent Democrat, can’t stop talking about his motives. Sinema isn’t even calling her friends. She’s rocketed into the national zeitgeist as an enigma, one of the least understood politicians in Washington.

All that, in Romney’s mind, makes her a “tough cookie.”

Adding yet another layer of confusion to the whole thing is why Simena posed for the cheeky photo with him in the first place, considering that he opposes the Equality Act and believes it should be legal under federal law for her to be fired from her job for being bisexual.

The whole thing is a real head scratcher. But one thing seems pretty clear: Romney is trying to flatter Sinema and hopefully get her to ditch her party and join Republicans, and Sinema is loving every minute of the attention.

My God this is where we’re at. Sitting Senators cosplaying TV characters to show that the democrat has switched teams.

Glad these two have found something constructive to do.

“We slashed the family leave from the bill because we hate you. Anyway, here’s a Ted Lasso thing”

Showing your disdain for the working class and poor is really on brand. Fantastic job! 🤡

This is creepy and weird

Yeah, I'm out. Release me from this mortal coil.