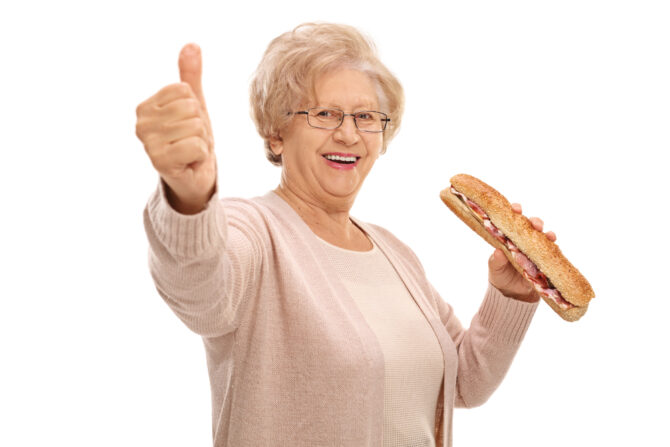 Sometimes, moms with gay adult sons get hungry, and all they can think about is getting their hands on a sandwich.

This week, Twitter user @SpiceBoyJoey wrote, “mom asked if Grindr is for ‘ordering subs’ and i just walked out of the room.”

For those of you who might not know, “grinder” is another word for a submarine sandwich used in parts of New England, not to be confused with “Grindr”, the gay hookup app.

A common term in New England is grinder, but its origin has several possibilities. One theory has the name coming from Italian-American slang for a dock worker, among whom the sandwich was popular.Others say that it was called a grinder because the bread’s hard crust required much chewing.

In Pennsylvania, New York, and parts of New England, the term grinder usually refers to a hot submarine sandwich (meatball, sausage, etc.), whereas a cold sandwich (e.g., cold cuts) is usually called a “sub”. In the Philadelphia area, the term grinder is also applied to any hoagie that is toasted in the oven after assembly, whether or not it is made with traditionally hot ingredients.

Here’s how people have been responding…

I’m her defense there is a sub chain in Columbus OH by that name pic.twitter.com/0WOzQJWkxF

She’s not entirely off base…

well i use it to order subs

Yeah, “ordering doms” would be against the norms.

after an hour of frustration trying to order an eggplant parm and a peach smoothie, a large man shows up at her door carrying a smaller man and the most depraved assortment of bondage equipment you’ve ever seen

I read this to my husband and he just pantomimed unzipping a gimp mask and said “Sometimes,” and winked.

Well, I’ve heard you can order a 6 incher on there, I think a footlong is a bit much, though.

Related: His mom found his poppers. What happened next was, well, kinda awkward.