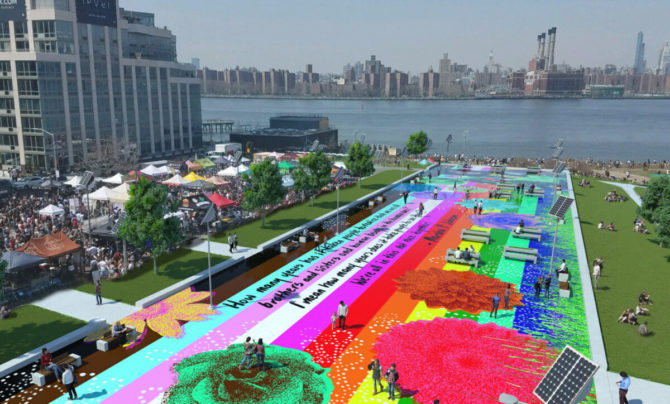 Officials initially announced the park last year, set as a revamp of East River State Park in the Williamsburg neighborhood. The park would have featured a new park house, restored concrete, new seating areas, and a ground mural featuring the transgender and queer pride colors. For the moment, however, work on the redesign has gone on hiatus pending more input from the community.

“The interpretive design elements of this project will not be installed until we can develop a new path forward with the community,” New York City regional director Leslie Wright said in a statement, according to Gay City News. “This means no mural will be placed on the historical concrete slabs in the park and no floral interpretive elements will be installed in the gantry plaza area. We will work hand in hand with the community to identify a more appropriate commemorative design.”

The redesign of the park had come under fire from Johnson’s family as well as transgender activists who felt they were not properly consulted prior to the adoption of the new design. They also criticized the revamp as a vanity project of sorts for embattled New York Governor Andrew Cuomo.

“I personally feel this was a mass deception campaign and our family was deceived, moving forward, from this point forward, no one will be trying to exploit my cousin’s name without consulting with my family,” Marsha Johnson’s cousin James Carey said during a Community Board 1’s Parks Committee on March 4. “I sent correspondences to the governor personally to let him know that our family as a whole we’re happy that you’re naming the park in the memory of our family member, however, please when the occasion arises, please include us. Not one person — no one – responded, and I find it absurd.”

Construction on some of the park’s base elements–including the new park house and updated drainage systems–will continue pending a new plan of action for the redesign. Leslie Wright also issued an apology to the community, and vowed to welcome community input moving forward.

“The leadership of the Office of Parks, Recreation, and Historic Preservation have heard the feedback and realized that the design outreach we did was simply not enough, and for that we are deeply sorry,” Wright said in an open letter dated March 9. “Our open space is extremely vital to our communities. It is important that we get this right and that we get this open to our community. With your help we are confident we can do both.”