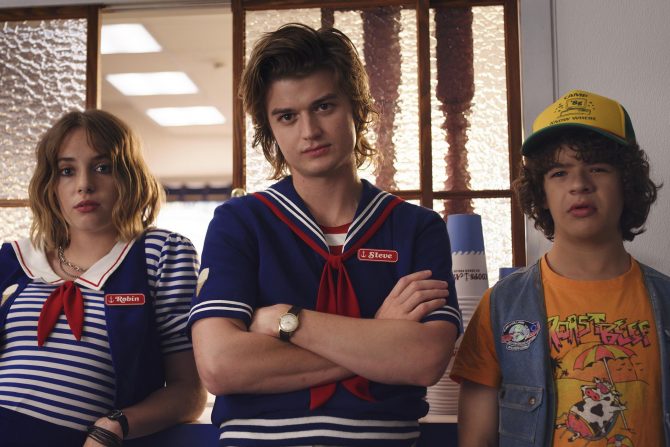 Nobody expected this ode to classic horror, 80s movies, adolescence and sci-fi thrillers to become a cultural phenomenon back in 2016 when it premiered. Four years later, it remains one of the most popular series in the world–and one with some welcome queer characters.

For the uninitiated (all three of you), Stranger Things follows the adventures of a group of small-town Indiana kids following the disappearance of their friend Will (Noah Schnapp). Coinciding with Will’s vanishing is the appearance of Eleven (Millie Bobby Brown), a socially awkward kid and the product of a lab experiment into telekinesis and dimension-hopping. As the townsfolk search for Will, they begin to uncover a dangerous and disturbing supernatural conspiracy, one which pushes the boundaries of human understanding and threatened to unleash darkness on the entire world.

It’s that kind of show. As if Stranger Things didn’t have enough going for it with its mix of mystery, nostalgia and thrills, the show also features LGBTQ people on both sides of the screen. That includes actress Shannon Purser, who scored an Emmy nomination for her iconic work as the nerdy girl Barb, and the character of Robin (Maya Hawke), a punk lesbian genius. Fans also have noticed some clues that the aforementioned Will Byers might be gay also, though cast & crew alike remain mum on the subject. So is he or isn’t he? Watch and decide for yourself.