Frankly, we were beginning to worry the disused basement in which its leader does her bidding had flooded, water-logging her Smith-Corona and temporarily derailing her crusade against all things unChristian.

But now she’s back, firing off inchoate press releases against the Disney cartoon “Doc McStuffins,” which features an interracial lesbian couple voiced by Wanda Sykes and Portia de Rossi.

As you can see, the episode looks highly provocative and poisonous: 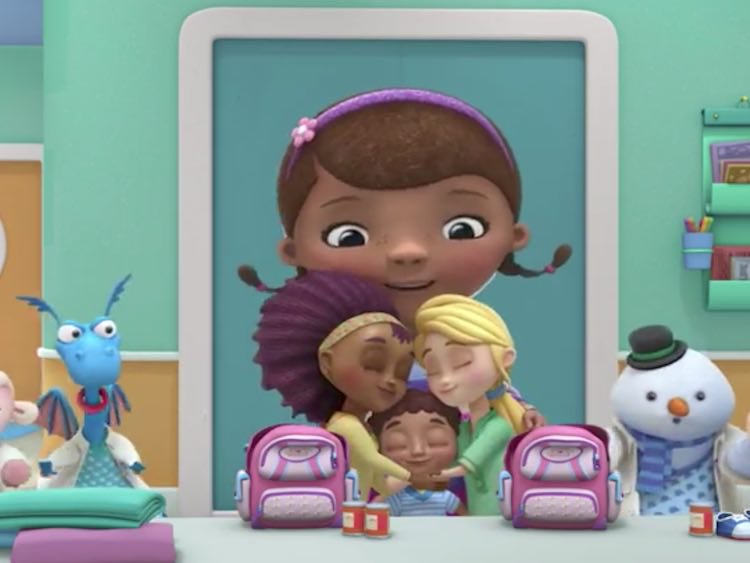 The episode, titled “The Emergency Plan,” marks the first time a Disney Junior Show has ever featured same-sex parents in any capacity.

One Million Moms, eager to demonstrate that she’s still the human equivalent of an anorectal abscess, pounced on the episode, which GLAAD hailed as “groundbreaking.”

“Controversial topics and lifestyle choices should be left up to the parents to discuss and Disney Junior should not introduce this to young child,” the press release states.

“Just because an issue may be legal or because some are choosing a lifestyle doesn’t make it morally correct. Disney should stick to entertaining and providing family-friendly programming instead of pushing an agenda.”

The press release strongly advises furious parents to rise up in a pinch-faced stew of fishy-eyed hatred to rant and rail against the episode.

“Families tuning in to watch this children’s program will encounter a premature discussion on sexual orientation that is completely unnecessary,” the press release states.

“I always envision Doc McStuffins as a show about what it means to accept everyone as part of our communities.

As part of a two-mom family, I’m proud to have an episode that reflects my son’s world, and shows everyone that love is love in McStuffinsville.”

Related: Guess how many signatures One Million Moms got on their latest non-troversy? (Hint: not a million)

“Children like mine deserve the chance to see their families reflected on TV, and this episode does just that in a beautiful and positive way,” she writes.

“Shows like this reflect our real world, and today that includes the many children being raised by gay and lesbian parents who are all going to celebrate this story.”

As Pink News points out, One Million Moms currently have 3,722 Twitter followers, and most of them are male, so…