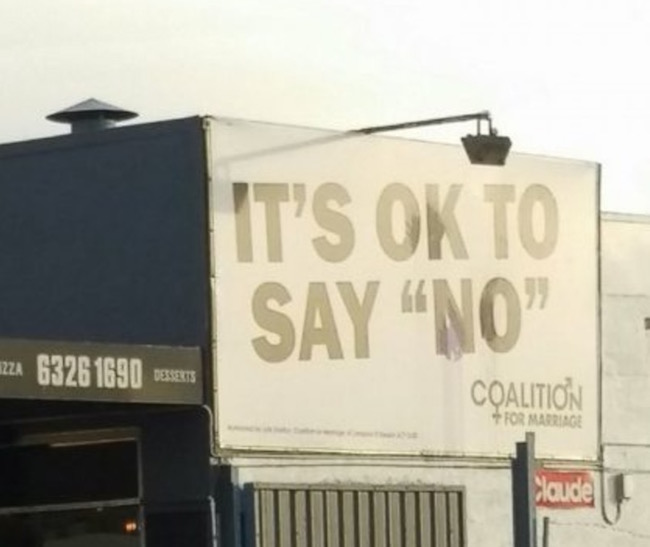 Recently, when the staff of an Australian pizzeria arrived to work, they discovered a brand-new billboard emblazoned with a virulently antigay slogan right next to their place of business.

The Coalition for Marriage, Australia’s most prominent antigay marriage lobbying organization, happily footed the bill for the sign, erected in Launceston, Tasmania.

Related: 16 Ways Pizza Is BETTER Than Dating! (Which isn’t a wack concept.)

Ahead of the country’s public vote about whether same-sex marriage should be legalized,  the signage reads: “It’s OK to say No,” none-too subtly.

Well, Wiseguise Pizza staffers didn’t take too kindly to the sign, which was posted directly next door to their business.

Enterprising employees checked with management and got the go-ahead to add their own two cents to the message, practicing simple but effective white magic by painting the words “…to pineapple on pizza,” effectively defanging the billboard’s message. 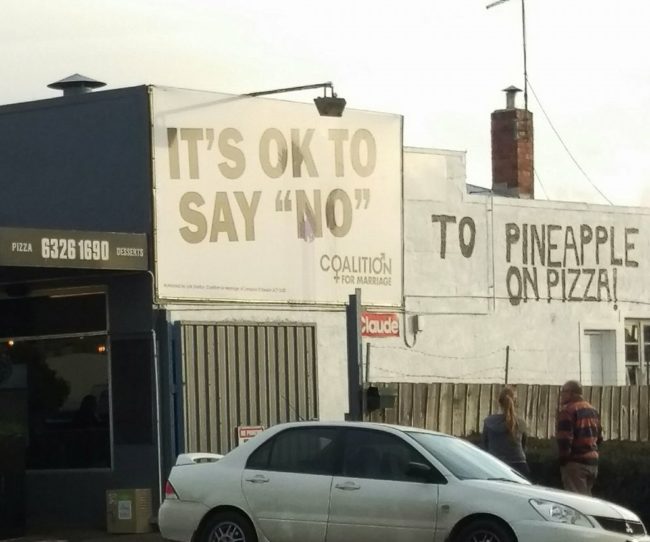 “It’s a huge debate at the moment, obviously, everyone’s talking about whether pineapple should be on pizza or not.”

He added the establishment is ultimately “respectful of everyone’s opinions” and they’re all “just here to make pizza”.

The inspired act of sabotage is also 100% legal, since  “we are painting the side of our building, not on the sign”.

Alex Jones, managing director of Wiseguise, was concerned the billboard would frighten away potential customers, who could easily be led to believe the shop endorsed the message.

“We try not to have a political point of view as a business,” he says, “so I think we’ve taken the stance away from it.”

“I think this is a better solution to just the sign on its own.

It’s the Australian way, you know, to take an issue that’s got a lot of people divided at the moment and make it a little bit more light-hearted.

Obviously we’re big believers in freedom of speech, and we’re very lucky that we live in a country that allows us to be like that.”