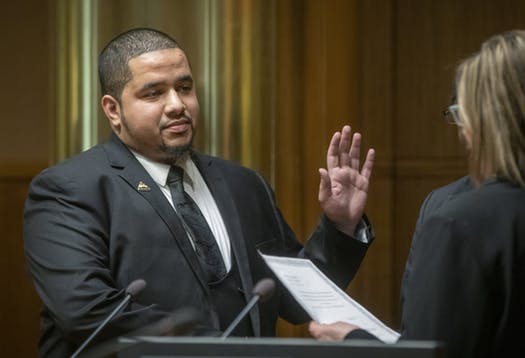 A local politician from Minnesota who has been exposed as a bigot says he’s allowed to be homophobic because his religion says so, and anyone who feels otherwise is attacking his faith.

Kassim Busuri is a City Council member from St. Paul, Minnesota. Last Wednesday, the council approved a resolution recognizing June as LGBTQ Pride Month. The resolution was sponsored by every council member except Busuri.

Busuri later said the reason he didn’t sponsor it was because he only learned about it “minutes” before it was presented to the council, and he didn’t have enough time to read it over.

That excuse might have gotten him out of the dog house. Until a bunch of old homophobic social media posts written by Busuri surfaced a few hours later.

Several screenshots of homophobic comments made by Busuri on social media hit Twitter and Facebook last Wednesday evening. Some of the comments were made as recently as 2015.

Hey @KassimBusuri, I’d love to hear an explanation for why you didn’t sponsor the LGBTQ Pride/Stonewall resolution today for the City Council. I was 100% willing to give you the benefit of the doubt, but now I’m… concerned. pic.twitter.com/Hkk0kHPobp

In September 2013, Busuri shared a news article on his Facebook page noting that the makers of Pasta Barilla had taken an anti-gay stance and the CEO had urged gay customers who were offended by it to buy other brands.

Busuri captioned the post, “Guido Barilla said Wednesday on an Italian radio show, ‘I would never do an advert with a homosexual family.’ I have to go buy some Pasta Barilla now.”

In February 2014, Busuri shared a news article on his Facebook page noting the president of Uganda had signed a bill into law against homosexuality. In the post, Busuri stated, “That’s why I am going back to Uganda.”

The legislation, which was later annulled by the courts, carried a potential punishment of life imprisonment for men convicted of having gay sex.

In February 2015, Busuri posted to Facebook that he had run into an old acquaintance. “(I’m) no homo, but he looked great,” Busuri wrote.

Rather than, say, apologize for his bigotry, Busuri, who is Muslim, hit back at critics accusing him of homophobia by accusing them of Islamophobia.

Um, holding a person accountable for gleefully celebrating a country for imprisoning LGBTQ people or using the word “homo” to disparage gay men is NOT the same as attacking them for their religious beliefs.

It is true, I did not take a picture with some of my colleagues and a rainbow flag nor did I vote or speak for or against resolution recognizing the 50th anniversary of Stonewall. What is also true is that I am Muslim and I believe in the dignity of all human beings and that no one should be persecuted for their faith, values, beliefs, or who they are.

“As a queer person of color, I expect and rely on our elected officials to do the right thing to support our marginalized communities,” one commenter said. “Shame.”

“As a young Muslim women this is not what a ‘community leader’ does,” another said. “This is not Islam, this is bigotry. It will certainly not stand.”

Others had much sharper criticism, writing “This is disgusting,” “Polish up your resume!” and “Resign.”