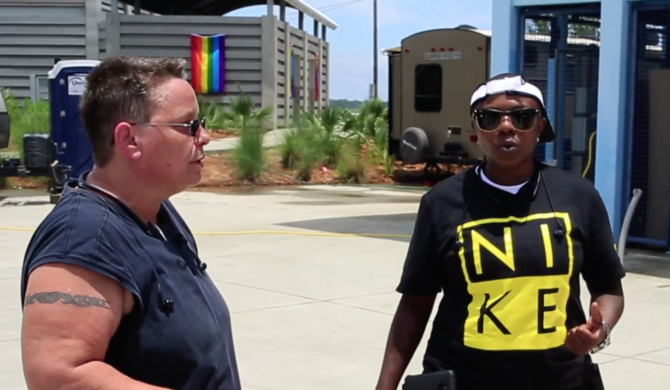 “Is that a thing?” I ask, somewhat dumbstruck.

“Isn’t everything a thing?” Ingram asks me. “You can Google anything, but you can’t Google that?”

He has a point. His sense of humor also betrays his artistic sensibility. As a filmmaker, Ingram gravitates to all things fringe, reveling in the unique beauty of it all. He doesn’t let fear stop him from exploring something new, taboo subjects or peculiar interests. After two less-than-successful narrative features (produced by his longtime friend Kevin Smith, who appeared with him on the cover of A Bear’s Life magazine), Ingram found his true calling as a documentarian. With the 2006 premiere of Small Town Gay Bar at the Sundance Film Festival, Ingram has earned a reputation as a sincere, playful director.

“Am I being blasphemous?” Ingram giggles.

Ingram’s forthcoming film Southern Pride is about the first ever pride celebrations in two small Mississippi towns. The film comes to VOD June 11.

So how did you discover Lynn Koval, the organizer of Biloxi Pride [and owner of the city’s only gay bar, Just Us]?

I wrote an article for CNN after Orlando, after the shootings [at Pulse nightclub]. CNN, because of Small Town Gay Bar, had contacted me and wanted me to write this thing on safe space. Lynn had been in contact long before, but we hadn’t had contact in a long time. But it got me thinking about revisiting the area. I reached out to her, and we started this dialogue. I thought, maybe I’d do a reality show and revisit that world.

Then, literally the night Trump won the election, I woke up and thought f*ck it. I need to make this documentary. I need to make it now. We started shooting the day of the inauguration, and in the process, independently, Lynn decided she was going to have a pride. The fact that she wanted to have a pride made the narrative much easier to create.

How reluctant were she and the bar patrons of Just Us—they “gays of our lives,” as one patron refers to them—to become part of a doc?

She was gung-ho. Lynn is a remarkable human. We need more people like her. And she went warts & all. I’m sure she regretted it many times.

She’s not a stupid person. It’s incredibly complicated to try and get your community together, to put together a pride event for the first time. She had so much going against her. And she had the courage to let me film it. She never had any regret. When she finally saw the movie, of course, she had issues with it but she never asked me to take anything out. She stands by it. She’s a remarkable, incredibly complicated woman.

What about with Shawn Perryon, owner of the gay KlubXclusive in Hattiesburg who organizes black pride? She’s my kind of people.

She comes off as someone completely unapologetic for who she is and really, really cool.

She’s been through a lot of sh*t. She’s been in jail. She’s somebody who’s seen sh*t, but has found peace. She’s found her way. She’s going to make a difference, and she’s going to do it her way. We actually—the funny thing is—I was in such a rush to get down to Biloxi, that when I got there I was like what else is going on? [Shawn] didn’t even have a website for her place. I found her bar on a Facebook page. I didn’t even know if it was going to be open, so we took the drive up there and met Shawn. At first, I was intimidated. She’s a very serious person. I told her who I was and gave her a copy of Small Town Gay Bar and told her I wanted to include her bar in the film. Eventually, she came back and said she’d already had this idea for [black pride]. It was like, total happenstance.

One of the interesting elements of the film is the way that people tend to write off pride or similar celebrations as being run by degenerate hoodlums.

I always thought the degenerates went to Pride, not run it.

That may be true, but every festival has similar blowback for the cost and the mess. How was the aftermath of Biloxi Pride?

The thing about the south is that they’re going talk behind your back. They’re non-confrontational. A lot of people had issues with it, but they’re not going to form a protest or stop it from happening. Both prides are having their third year in the next few weeks. I’m going to go to Shawn’s. Lynn isn’t that much involved with her pride. Shawn’s still the driving voice in hers.

Were there incidents of harassment or homophobia that didn’t make the final cut?

The thing about it is it’s not just the south. All over America and the world that attitude is permissive. There’s nothing I saw. You heard things. Biloxi is a town that doesn’t like Black Spring Break [a beach festival by African-American college students on spring break]. At all. But it’s one of those things. What town likes to be overrun by kids? But the racial element certainly comes into it. It’s a fascinating thing to watch. Imagine the complications of a bunch of partying university kids in your town, and then add the concept of racial issues. The general town doesn’t embrace these events.

In short, why isn’t that in the film?

It wasn’t really the story I was telling. It was interesting, but it would have been really tangential. When you have a group of people coming together being noisy, people automatically are like I don’t like it. Then if there’s something that differentiates them, they’re going to emphasize that. It’s the same as Why do they need to have Pride? It’s what we’re seeing in Boston right now with “straight pride.”

Pride is really important because people forget: Pride is about the people who need it. In our film, what’s really wonderful is that the young people there have never been able to get together before and get to be gay. They got to all get-together and be who they are. And Lynn created a safe space for the first time in their town. For the first time in their town, these people got to be who they were. They got to hold hands. They got to kiss. They got to have a moment with protesters. They got to wave their flags in their own town. The one thing I kept hearing over and over was, “I never thought I’d see the day.” And the younger people were just elated. They know it’s happening [in big cities elsewhere]. But to have pride in their own town, it validates them. That’s so important.

That’s just who showed up to do it. The lesbians took over and made the event happen. Lynn is the strongest force in Mississippi’s queer community. That bar is an anchor in that town.

I was worried in the film when I saw the road around Just Us getting torn up. Is the bar still open?

As long as Lynn Koval is living–that bar and Lynn are one. That bar is amazing. That was a privilege; it’s my favorite bar I’ve ever been to. It’s open 24 hours a day. It never closes. At holidays, Lynn will have a potluck. She makes a turkey and people come in. It’s a community center. People have such misconceptions about the south. There are small-minded assholes everywhere. There are advocates everywhere. Lynn has taken on the responsibility of being an advocate, and she takes it very seriously. She cares about people. Shawn’s the same way.

In films I’ve seen recently, there is this theme of class warfare, of the political divide. But the reality is the divide isn’t on party lines necessarily. It’s more about urban vs. rural people.

Representation is everything. Lynn’s been doing this now for almost 30 years. When she first opened up, the cops would bust them. People would run in and bust sh*t up. But she persevered, and now she’s part of the community. I don’t think it would be a safe place for gay people without Lynn. The same is true [of Shawn] and Hattiesburg. Neither Shawn nor Lynn is motivated by money. It’s a calling.

This is your fifth documentary. It’s also your second about a small town gay bar. What’s the fascination?

I like misfits. I like fringe, misfit communities. I didn’t come out until my ’30s. I was a very confused kid. So my documentaries are very much letters to my 16-year-old self. If I had seen them, the world would have made more sense. These movies are all made through private financing.

Back to the fringe tapestry though. Your movies also tend to focus on—not niche, really—but more like the fibers of the queer tapestry. The groups within a group, be it small town folk, bears, athletes, etc. Do you feel a certain obligation to your community to tell these stories?

I wouldn’t say it’s a moral obligation. It’s what interests me. I love the gay community. I love being gay, and I have a lot of empathy for the struggles of everybody. I would like to make it easier for people. I started off making narrative films, and I was fucking shitty at it.

I was really bad.

Well, you beat me to the question about returning to narrative…

I made narrative films when I was too young. I was very lucky. But I realized very quickly—and Kevin [Smith] helped me learn this—if you’re passionate about something, it’ll get done. The last narrative I made, I didn’t give a fuck about it. And it’s a bummer because the cast was great. I worked with Elizabeth Berkley!

That’s what keeps me going.