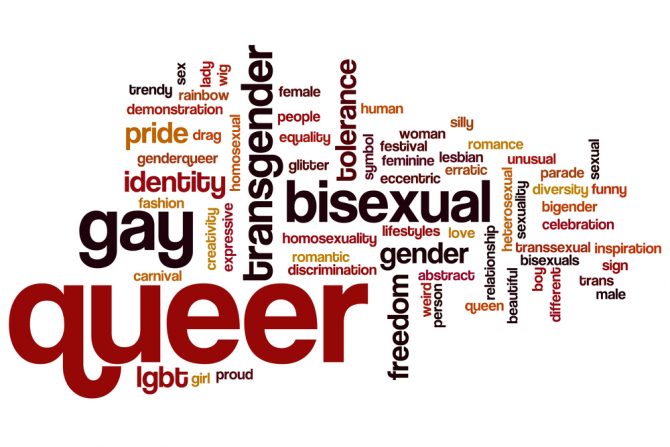 Apples and oranges. No name-tags are necessary. Most of us can recognize and tell the two fruits apart just by looking at them.

But what about when you talk apples and oranges? That’s when the words that identify them  — “apple” and “orange” — become essential. You don’t want someone to think you’re talking about one fruit when you’re actually talking about the other one. And just in case anyone can’t differentiate between both round-ish fruits on sight, there are labels to tell us what we’re looking at in supermarket produce sections.

Labels bring order to grocery stores — and to life. Categorization via labels is the crux of zoology, botany, chemistry, and so many other sciences. In the animal and plant kingdoms, labeling is an exact science.

But why does it create so many problems when we apply it to homo sapiens? “I don’t believe in labels,” some say, as if the very idea of categorization is an insult to their intelligence and humanity. Although they may not object to being identified as “black” or “white,” they’ll avoid “gay” and “lesbian” like the plague.

But what would “LGBTQ” be without the labels that each letter of the acronym represents? What would the Pride that we’re currently celebrating be? “Human Pride” wouldn’t have the same impact or cultural, social, and historical significance as “Gay Pride” or “LGBTQ Pride,” which is something that the Boston-based organizers of Straight Pride have completely missed. Labels connect us and describe us, but they don’t have to define us or limit us to the point that we cease being anything else.

The trouble with labels isn’t the words we use but how we use them. “Blonde” isn’t a problem when it refers strictly to hair color. It becomes one, though, when it becomes a synonym for “dumb.”

“Black” to describe a dress is one thing, but attach it to a person, and it can be loaded with subtext. Labels become dangerous when people use them to separate and denigrate, when they’re no longer a purely descriptive tool but a way of rearranging homo sapiens into caste systems.

This is no more true than when it comes to race, gender, and sexual orientation and identity — all four of which involve labeling as an agent of both categorization and oppression. Over the centuries, race has evolved into something so complex and overlapping, and gender and sexual orientation and identity are now so fluid and, to an extent, arbitrary that traditional labels have been rendered virtually meaningless. Meanwhile, labels in general have taken on even greater significance.

Interracial coupling has turned black and white into countless shades of brown. The PC community promoted “biracial” as an alternative to “mulatto” to accommodate the new normal of race, but as the word broadly describes a spectrum of blended ethnicities and cultural associations, it almost demands further labeling.

Gender has branched out from strictly “male” and “female” to encompass “trans,” “non-binary,” “gender-nonconforming,” “gender fluid,” and a host of other awkward tags in order to be as inclusive as possible.

Sexual orientation and identity are no longer just “gay,” “straight,” or “bi.” Many now identify as “queer” and “sexually fluid” as well as the more specific “omnisexual,” “pansexual,” and “polysexual.” And if none of those suit, there’s also “bi-curious,” “demisexual,” “gender-blind,” and “same-gender loving.” The proliferation of labels may threaten to turn sexual orientation into a collection of trendy buzzwords, but there are benefits, too.

By adjusting the way we think about not-“straight” and bringing new words into the mix, we’ve boosted our battalions. In a sense, coining labels hasn’t divided the community but strengthened it. Men who are sexually attracted to other men but don’t think of themselves as “gay,” for whatever reason, are more likely to feel like they have a safe space within our ranks.

Label critics often dismiss them as being limiting and suffocating, but the new ones reflect the ever-changing nature of human nature. Unlike apples and oranges — which are what they are from when they bloom to when we eat them — people are not static. We may always be human, but we don’t always wake up feeling like the same human.

Chaka Khan’s “I’m Every Woman” and Shania Twain’s “Man! I Feel Like a Woman!” were once great musical statements of female empowerment, but in 2019, their sentiments might sound quaint and way too limiting for some. Despite her hyper-awareness of gender in the title and lyrics of her turn-of-the-millennium hit, Shania began the video wearing a tuxedo gown, twenty years before Billy Porter did.

I recently interviewed a famous musician who would rather identify as “alien” than “male” or “female,” and although they were born female and they’re sexually attracted to women, they resist the “lesbian” tag. As they see it, we are all just humans, and we should do away with labels entirely. They only separate us, and give us weapons to bring each other down.

It’s a lovely but naive sentiment. Even without labels, we’d still find some other way of bringing each other down. Homophobes won’t suddenly stop hurling their sling shots because they are at a loss for words to describe what they hate. Racists won’t morph into accepting advocates of colorblind.

Unprivileged minorities won’t cease to be unprivileged minorities if we were to stop labeling them. It would just become more difficult to talk about it. Personally, I derive much of my strength and self-awareness from identifying as “black” and “gay.” I don’t think I would be the same person if I were simply “human.”

Ultimately, it’s our choice how we want to self-identify. Bur we live in a world of communities, and the first step in finding our own communities is to find the ones with descriptions (i.e., labels) that fit us.

To accept our differences, we need to be able to talk about them. And we can’t talk about them without words to indicate those differences. Labels make a complex world easier to navigate. They provide a semblance of order to the messiness of life.

So it’s time to let labels off the hook. They’re not holding us back. Those who refuse to see past them deserve all the credit for that.