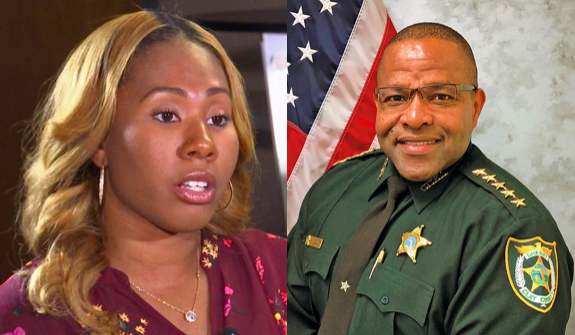 A pro-Trump Sheriff from Florida has found himself ensnared in a truly Trumpian sex scandal.

In May 2019, Clay County Sheriff Darryl Daniels called one of his own deputies to report that he was being followed by someone in a Jeep and that he believed his life was in danger.

As it turned out, the person following him was 27-year-old Cierra Smith, the woman with whom 55-year-old Daniels had been having an extramarital affair for the past six years.

Not only that, but she was en route to meet him for a booty call at their regular hookup spot.

Daniels falsely accused Smith of stalking him and had her detained for several hours. She was never charged, however, and, now, he’s is the one behind bars.

After a year-long investigation, Florida authorities finally arrested Daniels last Thursday on four charges, including giving false information to law enforcement officials and tampering with evidence. Then on Friday, Gov. Ron DeSantis suspended him from his job and appointed an interim sheriff.

Because Daniels is currently up for reelection and his primary is… today.

According to Clay County Supervisor of Elections Chris Chambless, roughly half of the county’s primary voters had already submitted their ballots during the early voting period prior to Daniels’ arrest last Thursday.

Not only that, but this year’s primary election has drawn the largest turnout the county has ever seen thanks to mail-in voting.

As the incumbent, there’s a very good chance Daniels will win both today’s primary and the general election in November, which means he would be sworn back into office in January, which means DeSantis will have to remove him from office a second time and then re-appoint another interim sheriff.

In a video statement following his arrest, Daniels claimed he’s the victim of a political smear campaign, that he is totally innocent, and that he’s never acted illegally in his life.

“I want you to look past the smokescreen of dirty politics,” he said. “One thing I take ownership of as a man is failures as a husband. That has nothing to do with me as a sheriff.”

As for Smith, she calls the whole thing “disturbing” and says she never wants to see Daniels again. (We can’t say we blame her.)

Last month, Daniels was among 47 different sheriffs who endorsed Donald Trump for reelection, according to a press release from the Trump-Pence campaign.