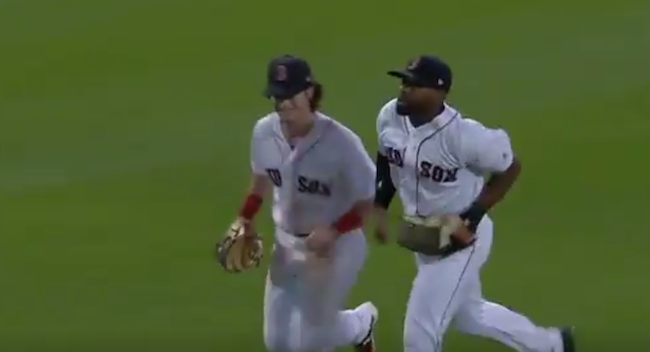 You probably never envisioned a future in which “Gay Pride” and “Major League Baseball” could comfortably fit into the same sentence, and yet here we are.

Last Friday, the Red Sox competed with the Detroit Tigers at Boston’s Fenway Park,  and during the game, Pride was celebrated in a number of ways. At the kickoff event for Boston’s Pride weekend, game attendees were given Red Sox Pride flags, and the pitcher’s mound was painted in rainbow colors to commemorate the occasion.

The Red Sox hailed the event as “the perfect way to celebrate equality and community” on their official website.

Check out the vibrant pitcher’s mound below:

And learn about its creation here:

As NewNowNext reports, there are only thirteen Major League Baseball teams that acknowledge Pride with their own LGBTQ Pride Nights, but there’s every reason to expect that others will catch on in the years to come.