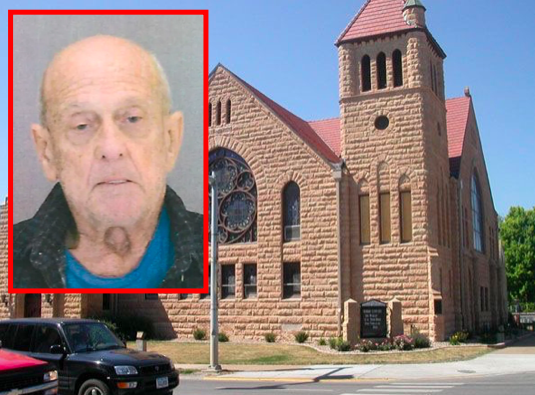 It’s happened again, again. Another religious leader has been busted for having gay sex with a minor.

82-year-old David Holmes, the retired pastor from Central United Methodist Church in Oskaloosa, Iowa, was just slapped with an eight-year prison sentence after he hooked up with a 14-year-old boy who he met on Grindr.

Prosecutor Don Kleine says he was hoping for a harsher sentence, but Judge Timothy Burns likely took Holmes’ advanced age into consideration when determining his sentence.

For now, Holmes be in prison until he’s 90 years old, though there’s the possibility he could be released after serving just four years.

“Certainly when you have anybody who preys on young people, you would hope the message would get sent that’s a severe sentence,” Kleine said after the sentencing this week.

According to court documents, Holmes first contacted the boy on Grindr back in 2017. They met in a hospital parking garage, where they engaged in oral sex.

But Kleine isn’t convinced the boy was Holmes’ only victim.

“You wouldn’t think this would just happen one time for someone that age to prey on a young person and to be involved in social media in the way that they were,” he said.

“The practice of homosexuality is incompatible with Christian teaching,” the page reads. “Therefore self-avowed practicing homosexuals are not to be certified as candidates, ordained as ministers, or appointed to serve in The United Methodist Church.”

There is also a detailed list of “chargeable offenses” for any United Methodist Church official caught acting gay.

Related: Antigay pastor has breakdown in pulpit, admits to having “affair” with underage boy to entire church