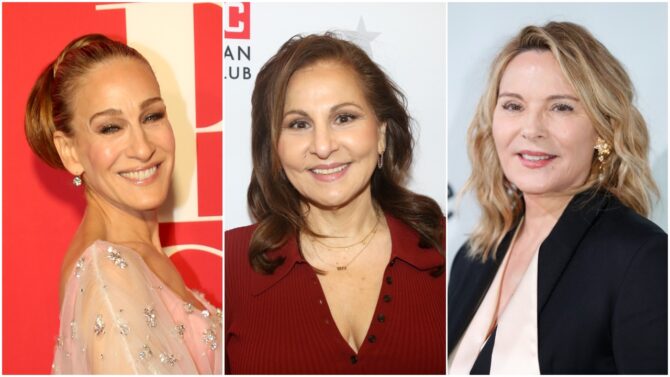 And just like that… the drama between former Sex And The City co-stars Sarah Jessica Parker and Kim Cattrall gets a little thornier. But is it all just a bunch of hocus pocus?

The actors’ long-standing beef—the reason Samantha Jones is MIA from SATC sequel series And Just Like That…—was in the headlines again this week after Parker guested on The Hollywood Reporter’s Awards Chatter podcast to speak her piece about all the gossip around her fizzled friendship with Cattrall.

Downplaying what’s been depicted by the media as a “catfight,” Parker was quick to point out she’s not made any public comments disparaging Cattrall, saying, “I’ve never uttered fighting words in my life about anybody that I’ve worked with ever. There is not a ‘fight’ going on. There has been no public dispute or spat or conversations or allegations made by me or anybody on my behalf. I wouldn’t do it. That is not the way I would have it.”

But then something happened that no one saw coming: The great Kathy Najimy weighed in. Well, sort of.

@KimCattrall Sending you alll the love and support in the WORLD today!! one of the best, most authentic humans in the 'business' and maybe the world! dinner soooon my love!

On one hand, the tweets read as nothing more than one beloved actor singing the praises of one of her peers. But the timing of it all is interesting, and it has fans wondering if this was no coincidence. Is Najimy choosing sides, subtly shading her very own (Sanderson) sister?

She and Parker go way back, of course, starring in every millennial’s favorite Halloween tradition, Hocus Pocus, as Mary and Sarah Sanderson, respectively. And soon the two will be reunited on screen—along with Bette Midler—in the long-awaited Hocus Pocus 2, set to debut on Disney+ this fall. Interestingly, the very next thing in Najimy’s Twitter feed is a retweet of the Hocus Pocus 2 announcement.

Our read of it is that Najimy—a gay icon and, by all accounts, a lovely human—is a bit of a “Switzerland” in this situation, trying to stay neutral by showing support for both actors. Which we’re happy to see! We’re still feeling the heartache over the wedge between Carrie Bradshaw and Samantha Jones (brunch will never be the same), so the last thing we want is a family feud among the Sanderson witches.

But this isn’t the first time the Sex And The City drama has bubbled over into the world of Hocus Pocus, leading fans to cry “toil and trouble”: Earlier this year, Cattrall—who famously doesn’t “want to be in a situation for even an hour where I’m not enjoying myself”—posted a selfie on Instagram with Najimy, sharing that the two were catching up on “all the gossip.” Very interesting.

In any event, as much as it pains us to say, it doesn’t look like Parker and Cattrall will be burying the hatchet any time soon. And with Najimy between them, well, we better brace ourselves for a fascinating Hocus Pocus 2 press tour!

Not Kathy Najimy joining in on the SJP / KC feud!!! The Hocus Pocus 2 press tour’s about to be awkwardddd

Kathy Najimy with that silent shade. I love to see it. https://t.co/dGWjATq0zW

Gagging her a bit pic.twitter.com/RZb53lwnjX

Ooooo I would have loved to be a fly on the wall. She also doesn’t follow SJP on IG but is following Kim. 👀🪰

SJP is making Kim Cattrall live rent free in her head in a one sided feud and thank GAWD Kathy Najimy is like “I can have my own friends, tyvm.”👀👀👀https://t.co/8IQ4X5qbjR pic.twitter.com/H8VUKZoomy