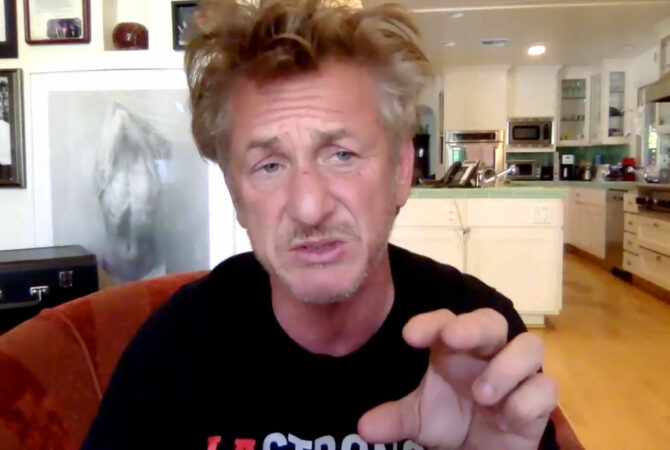 Two-time Oscar-winning actor Sean Penn has come under fire for comments about “feminized” men in a recent interview. Predictably, Twitter has thoughts.

Penn made the remarks while promoting the drama Flag Day in which he stars alongside his daughter, Dylan.

Speaking to The Independent, Penn said, “I think that men have, in my view, become quite feminized. I have these very strong women in my life who do not take masculinity as a sign of oppression toward them.”

The actor added, “There are a lot of, I think, cowardly genes that lead to people surrendering their jeans and putting on a skirt.”

“I am in the club that believes that men in American culture have become wildly feminized,” Penn told UK outlet iNews. “I don’t think that being a brute or having insensitivity or disrespect for women is anything to do with masculinity, or ever did. But I don’t think that [in order] to be fair to women, we should become them.”

Since his comments, Twitter had exploded with criticism for the actor…

I'm sorry, but is this the same Sean Penn who won an Oscar (and several other awards) for portraying gay icon Harvey Milk? https://t.co/cwyYUsZEBV

Sean Penn, who won an Oscar for playing a gay civil rights icon, is out there being homophobic. When LGBTQ+ people express reluctance to straight actors playing queer roles, this is exactly the kind of shit we're talking abouthttps://t.co/zqIgYFZSO7

Sean Penn being homophobic is on trend with his brand. ?

I blame the cowards raising them.

Sean Penn doesn't need to exist when Jeff Goldblum is out here killing it. pic.twitter.com/CFIns9niI1

I feel sorry for Sean Penn. He won an Oscar for playing one of the most iconic queer leaders in American history, and yet, even the preparation he did for that role failed to liberate him from the prison of his own gendered insecurity. Being Sean Penn is punishment in itself.

If your concept of manhood is so fragile an article of women’s clothing threatens it, maybe you need to reevaluate (@ Sean Penn)

jeff goldblum: sounds like a you problem, sean pic.twitter.com/s6QOCaI5N0

Well my days of not taking Sean Penn seriously are certainly coming to a middle.