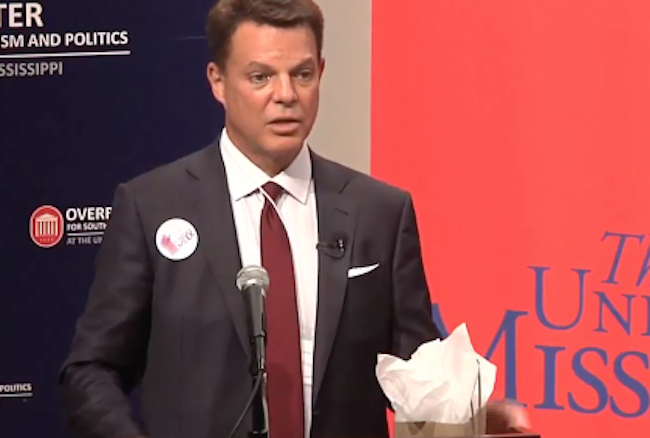 When Fox News anchor Shepard Smith walked up to the podium to give a speech at the University of Mississippi (Ole Miss), he never intended to open up quite as much as he did.

At an earlier discussion at the “It Starts with MEek” conference (which promotes diversity), Smith came to the conclusion his prepared speech simply didn’t match up with the overall vibe of the event.

Related: 10 GIFs That Sum Up Our Response To Shepard Smith Coming Out Of His Glass Closet

According to The Clarion-Ledger, Smith decided to improvise and speak from the heart:

“It wasn’t until seven, or eight, or nine years ago, I started living my truth. I grew up in Holly Springs. I went to the First Methodist Church. I went to Ole Miss. I was also trying to avoid what having a normal social life is. I didn’t need to go home and find my girlfriend or boyfriend. I just cut it off (and said), ‘Where do you want me? Next plane?’”

After dropping out of Ole Miss in ’87, Smith snared his first television job in Florida.

For the next ten years, his new job kept him on the move. He was married for 6 of those years, and thinks that coming out simply wasn’t a possibility:

“A. You’re going to hell for it. B. You’ll never have any friends again. C. What are you going to tell your family? And by the way, you’re on television on the craziest conservative network on Earth. That will probably put you in front of a brick wall and mow you down. Of course none of that was true, but that’s how it felt.”

Related: WATCH: When Fox News is furious with Trump, you know times are strange

“I don’t think about it,” he says, choosing instead to focus on his career. “It’s not a thing. I go to work. I manage a lot of people. I cover the news. I deal with holy hell around me. I go home to the man I’m in love with.”

Later on, he took questions from students, including: “What’s your best advice for getting a job in New York City?”

“Get a job somewhere else first,” he said. “We operate faster, and we speak different. And if you’re real polite, (they) hate you, because it gets in the way. There’s no time for it.”