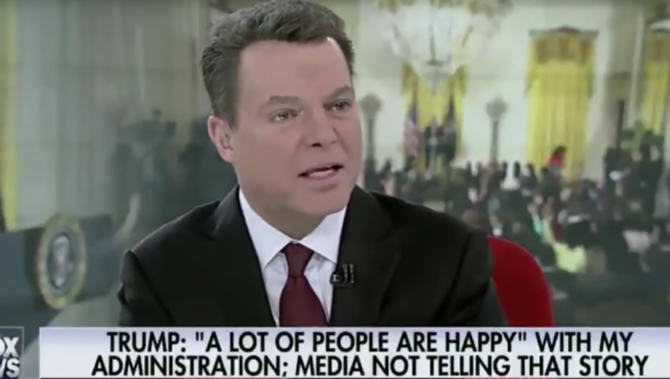 As the dust settles from what was without a doubt the strangest presidential press conference in recorded history on Thursday, many are still aghast that President Trump used the forum to take his attacks on the media to the next level. In particular, the president singled out CNN as being full of “anger and hatred” as well calling the network by his new catch phrase: “fake news.”

Out Fox News anchor Shepard Smith was having none of it:

It’s crazy what we’re watching every day. It’s absolutely crazy. He keeps repeating ridiculous throwaway lines that are not true at all and sort of avoiding this issue of Russia as if we’re some kind of fools for asking the question. Really? Your opposition was hacked, and the Russians were responsible for it, and your people were on the phone with Russia on the same day it was happening, and we’re fools for asking the questions?

No, sir. We’re not fools for asking these questions. And we demand to know the answer to this question. You owe this to the American people. Your supporters will support you either way. If your people were on the phone with her, what were they saying? We have a right to know. We absolutely do.

And that you call us “fake news” and put us down like children for asking these questions on behalf of the American people is inconsequential. The people deserve that answer at very least.

Assuming Trump keeps up with his schedule of watching as much television as he possibly can, we’ve got to wonder whether comments like Shep’s (and so many others) will actually penetrate his reality bubble.

It’s not exactly comforting that Trump had this to say about his performance on Twitter:

Thank you for all of the nice statements on the Press Conference yesterday. Rush Limbaugh said one of greatest ever. Fake media not happy!

Oh, well as long as Rush liked it…