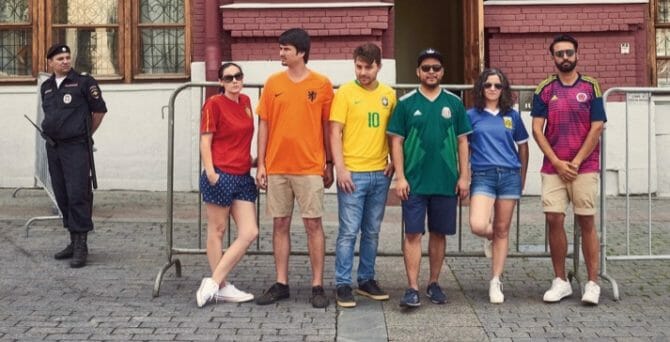 Six activists found a way to bring a message of LGBTQ acceptance and inclusivity into the heart of Russia during the World Cup.

Individually, each of the participants would easily blend into the crowd, but with their powers combined, they formed a living, breathing rainbow flag.

They called the stunt the Hidden Flag project, explaining:

“We have taken advantage of the fact the country is hosting the World Cup at the same time as Pride Month, to denounce their behaviour and take the rainbow flag to the streets of Russia.

In the plain light of day, in front of the Russian authorities, Russian society and the whole world, we wave the flag with pride.” 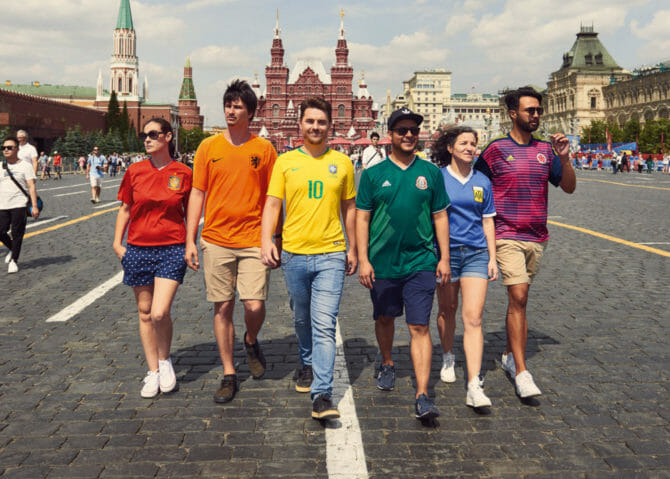 Photos of the colorful group have been snapped all around Moscow, where broadcasting any positive queer message in public has been illegal since Russia enacted its so-called “gay propaganda law” in 2013.

The group hails from all around the world — appropriate given the venue. Marta Marquez from Spain wears red, while Eric Houter, from the Netherlands, is in orange. Eloi Pierozan Junior is seen wearing Brazil’s yellow jersey, and Mexican-born Guillermo Leon, who was reportedly nervous and proud to participate, shines in green.

That just leaves Argentinian Vanesa Paola Ferrario in blue and Colombian Mateo Fernandez Gomez in purple to round out this global band of rainbow superheroes.

This wasn’t the only secret gay message at the World Cup in Russia.

Another group set up a somewhat complicated virtual wedding tool, marketing it with augmented reality gay messages at various stadiums around the country.