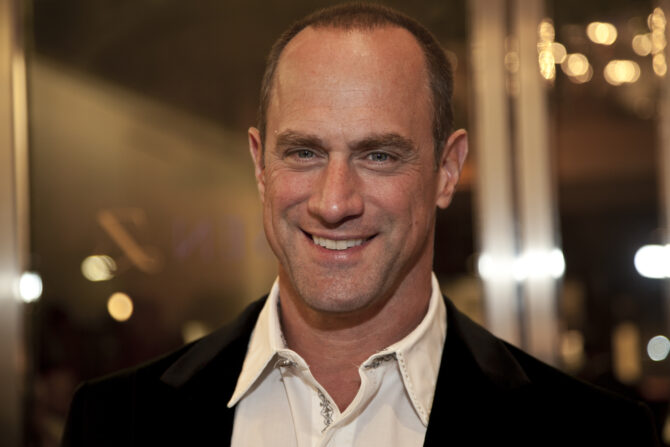 Actor Chris Meloni has amassed a huge fan base since being minted America’s Zaddy™, but according to one anonymous stick in the mud, all that status has gone to his head.

We don’t put much stock into the “snickering” source cited in OK! magazines hard-hitting exposé, “Christopher Meloni’s New Hunk Status Is Inflating His Ego”, who says the 61-year-old Law and Order star is annoying everyone on set with his nonstop workouts.

“Chris always thought he was the cat’s meow, but now his head has gotten even bigger,” the unnamed source said. “He looks great and he knows it, judging by the way he struts around and admires his reflection.”

“Now he’s got a whole gym on set, and anytime there’s a break in shooting, he begins working out. When he starts doing splits and clapping pushups, people can’t help but roll their eyes.”

Luckily, Meloni has a sense of humor about the whole thing. In an Instagram video post, he acted out everything the OK! source accused him of in front of the Law and Order: Organized Crime crew.

He joked that he “still has 100 push-ups to do”, prompting the crew to respond “superego” and “big ego”.

He also shared the OK! piece to his Instagram, teasing in the caption: “TONIGHT! Super Ego and @denisleary @daniellemonetruitt @ainsleyseiger Organize Crime on #L&OOC #thetruthcameout”

Last year, Meloni gave what is arguable the best quote to ever grace the pages of Men’s Health.

“I catch flies with my a** cheeks,” he told the magazine, “like a Venus flytrap.”

“I catch flies with my ass cheeks, like a Venus flytrap.”

For our September 2021 cover story, we met up with America's Zaddy™, @Chris_Meloni, who's not only swole at 60, but the proud owner of the butt that broke the internet to boot. ? https://t.co/6Oex4N4PDz

And when Interview Magazine asked him about being called a “zaddy,” he said: “I’ve been called that a lot, and who am I to argue with it? Sure, I’m a zaddy.”