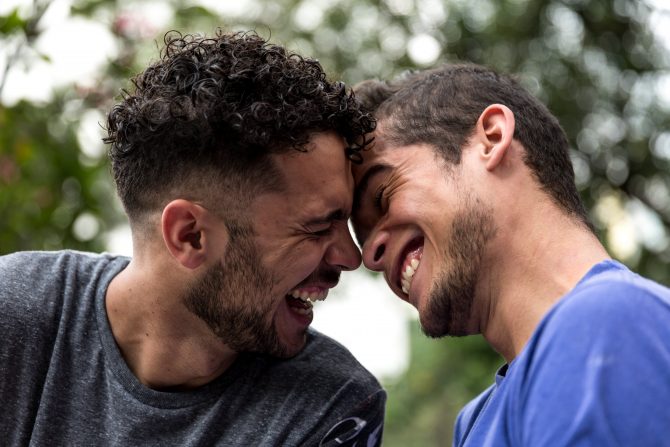 Not so straight anymore! A 20-year-old guy, exploring same-sex attraction for the first time, recently regaled the Internet with his love story with his 25-year-old bisexual pal.

“I’ve always thought I was straight,” a Reddit user named gooseygregory wrote on February 19. “Never had any inclination otherwise. I’ve snogged other lads on dares and playing Spin the Bottle and that, but I’ve never been attracted to guys and never had any kind of gay encounter/experimentation beyond the occasional man-on-man smooch.”

Related: Teen falls in love with his “straight” lifelong friend, who then kisses him out of the blue

That all changed when a friend introduced Gregory to Oliver, whom Gregory described as “bisexual, with a heavy preference for men” and “objectively gorgeous in a sort of ‘Jason Momoa but less ripped’ sort of a way.”

But it’s not all sex appeal. “He is also like, the kindest, loveliest person I’ve ever met in my life, plus he’s incredibly funny, super-intelligent, has amazing taste in books and films and music,” Gregory wrote. “The more I got to know him, the more I wanted to spend time with him. At first, I thought it was in a normal ‘I wanna be this dude’s best mate’ kind of way but now I’m not so sure.”

I just want to be around him, like, all of the time. I actually get a bit sad and pine for him a bit if I don’t see him in ages. If I’m having a sh*tty day, him even just texting me “Hiya” or tagging me in a stupid meme makes me feel a million times better. I will literally clear my schedule to hang out with him. I catch myself staring at him and smiling like a total idiot all the time. I literally get butterflies when he hugs me. I’ve thought about kissing him and more and I kinda really like the idea. I’m fully convinced I’m falling for this man.

In that first post, Gregory wrote that he was terrified and “freaking out big style” — not just because he wasn’t sure “what this means” for his sexuality but also because he thought Oliver was “way” out of his league.

Commenters urged him to act on his feelings, even if his romantic overtures start subtly. “Just take it at your own pace and figure it out,” one wrote. “I’d just be honest and tell him straight up you’re interested. If that’s too terrifying, you could try small hints at first, see if something happens.”

Another commented: “Try a little light flirting and see if he responds! I’m bi, and flirting with someone of the same gender can be extra scary, but at the end of the day, it’s flattering to be liked! Good luck, honey!”

Related: College guy realizes his best friend might be his boyfriend in the most adorable way possible

On February 23, Gregory posted a swoon-worthy update to his saga. “Sooo Oliver and I had our usual weekly beer and horror movie night on Friday,” he wrote. “I might have had one or two drinks too many. I might have gotten emotional and confessed some things to him.”

Turns out, Gregory’s love and lust were no mystery to Oliver. “He’d already pretty well deciphered that I have feelings for him, but he was waiting for me to say something because he didn’t want to push me to come out before I was ready,” Gregory wrote. “I kinda had a mini panic attack [because] I didn’t know what to do. He calmed me down, and then he actually made the first move, lol. We snogged for ages, messed around a bit, but I was too wasted and too nervous to have full-on sex. Slept in his bed with him, though, which was amazing!”

Gregory added that he and Oliver are “gonna make a go of things” and see how it goes. “We’re keeping it down-low for the moment until I’m more comfortable and confident in myself to tell people I like lads,” he said. “I’m so f*cking happy! Thank you, everyone, for the advice.”

What a difference four days make!