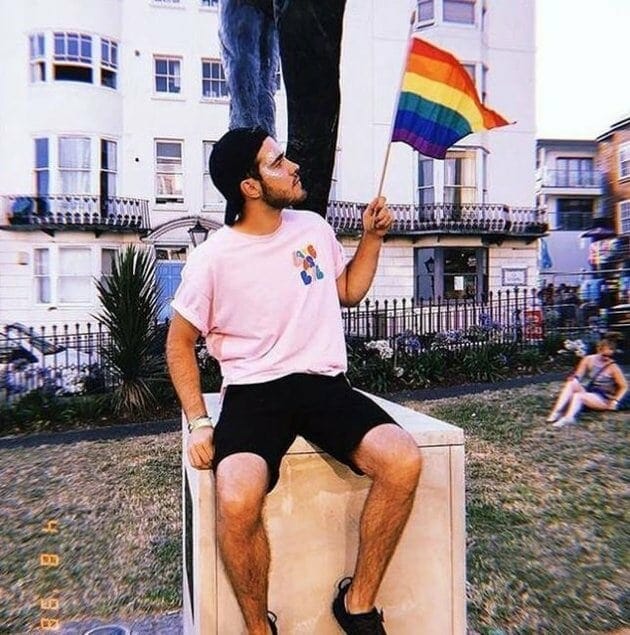 A popular YouTuber has apologized after posting a picture of himself posing on an AIDS memorial during Pride.

Alfie Deyes, who has followers in the millions and is in a very public relationship with fellow YouTuber Zoella, was in Brighton to celebrate with the LGBTQ community.

Stopping to pose for an otherwise unremarkable photo, Alfie hopped up onto the base of a statue, stared wistfully into the heavens and waved his flag.

There was just one problem — the Instagram set piece he indiscriminatnly selected is the Brighton AIDS memorial.

As one commenter wrote: “Unless i’m mistaken, that’s the f*cking Aids memorial statue. That’s where we gathered as a community after pulse to mourn the lost, where we meet every year for world aids day. It’s not a perch, it’s where we leave candles and messages.”

To his credit, after realizing his mistake, Alfie took down the photo and issued an apology.

“Just seen a tweet saying that in the picture I tweeted of myself celebrating Brighton Pride, I was sitting on the edge of an Aids Memorial.

For sure didn’t realise that and didn’t mean to offend anyone if the picture did. I’ve deleted it! Thanks for letting me know.”

But that’s not the end of the story.

Alfie was back on Twitter just a few hours later, wondering why people haven’t just moved on:

The replies I’m getting about sitting on the memorial..I didn’t even know it was a memorial and yet people are tweeting saying I don’t care about aids.

Spend your time educating others, rather than just instantly attacking.”

Call us crazy, but maybe a thoughtful donation to a local Brighton AIDS charity (for what it’s worth, Alfie is a 24-year-old multimillionaire), or a commitment to volunteer with a LGBTQ youth outreach organization, or literally any gesture beyond just hitting delete and saying “oops” would go a long way towards showing everyone what an ally he purports to be.