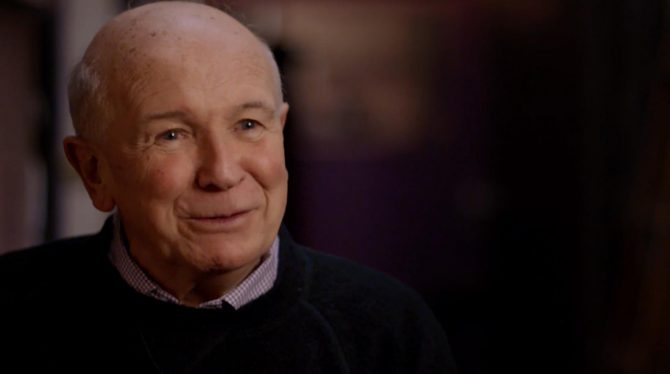 Who He Is: Broadway playwright

What He’s Contributed: Few stars shine as bright over the American stage as Terrence McNally. The Tony Award-winning author of Master Class, Frankie and Johnny in the Clair de Lune, The Full Monty and Ragtime, McNally has spent the entirety of his career open. Born in Florida, McNally moved to New York where he began dating playwright Edward Albee (Who’s Afraid of Virginia Woolf?). From his earliest work, McNally began an examination of homosexuality–a wildly taboo subject at the time. He set The Ritz in a bathhouse, took on AIDS in Lips Together, Teeth Apart, and examined relationships between men in his seminal Love! Valor! Compassion!. Not one to fear criticism, McNally authored Corpus Christi, which depicts Jesus and his disciples as gay men and with Judas as his boyfriend. Beyond his work on stage, McNally is a long time philanthropist to HIV/AIDS organizations. He married his husband Tom Kirdahy in 2010.

Why We’re Proud: Broadway actors speak of McNally as they might a saint. Not only does he have a great ear for drama, but he also has an eye for talent: Patrick Wilson, Christine Baranski, F. Murray Abraham, Nathan Lane, Kathy Bates, Audra McDonald, and John Glover all became stars after appearing in McNally’s work. McNally’s focus on subjects like AIDS and marriage equality have helped further the cause of equality.

There are issues that I just couldn’t not be vocal about. Theater affects people in a way that almost no other art form can. Just this past winter, Tom and I were driving to Florida and stopped at a local theater doing a production of “Mothers and Sons.” Afterward, a woman came up, trying not to cry. She said, “This afternoon my son told me he was gay, and I told him to get out of the house, that I never wanted to speak to him again until he reformed.” Then she burst into tears and said, “I don’t want to be that woman (in the play, based in part on McNally’s mother), what should I do?” We said, “Find him, hug him and tell him you love him. That’s all you have to do.”

That’s the power of theater.