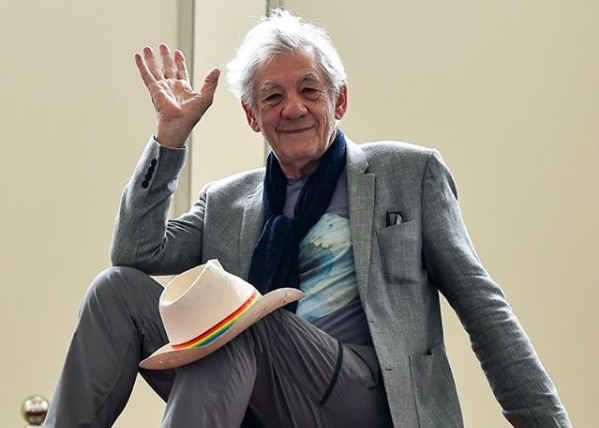 The man we all aspire to be when we’re older, Sir Ian McKellen, turns 80–80!–today and to celebrate, some of his closest friends are sharing their fondest memories of the beloved Hollywood icon.

Bill Condon, who directed the Oscar-winning film Gods and Monsters starring McKellen, share a particularly naughty story with The Guardian this week.

Condon described McKellen as a “young spirit,” as evidenced by the time they went to a Berlin sex club together.

“Last year, when we wrapped The Good Liar in Berlin, we went to a nasty club to celebrate,” Condon says. “It was a really, really intense sex club but also an art installation in a factory.”

“I left them there at 4am, Ian barely dressed. It was wonderful.”

Dame Judy Dench, who has known McKellen since they first worked together in 1965, was also interviewed by The Guardian.

When told about last year’s trip to the sex club, she replied, “He went to sex clubs in Berlin with people? Oh dash, I’ve missed out!”

Dench described McKellen as ” a very good friend to me,” adding, “I know that if I rang he would always make time to see me or be around or to be there with advice.”

“He’s like no other animal I know. A rare beast.”

I agree with the Albert Kennedy Trust when they say that no young person should have to choose between a safe space and being who they are. If you want to prevent LGBT youth homelessness support their #NoRoomForHate campaign this summer and visit www.akt.org.uk/noroomforhate

And then there’s Patrick Stewart, with whom McKellen has enjoyed a years-long bromance.

The pair first met in 1977 but didn’t become close friends until 2002 when they both worked on X-Men.

“I wasn’t absolutely ready to just fall into his arms,” Stewart recalls. “But we had adjoining luxury trailers and took to hanging out.”

“We became very good friends. As well as X-Men, we have worked together a lot on stage. Sometimes I feel we’re enjoying it too much and the audience don’t quite understand why we’re having so much fun.”

I am now an honorary Doctor of Letters at Cambridge University UK. My old college St Catharine' celebrated by flying the rainbow flag.

#tbt 1981 during my yearlong run in “Amadeus” on Broadway

An important book for the times, from Sally Kohn.

#tbt a fine summers day in 1965. I posed @chichesterft where, 52 years later, I will be on stage as King Lear beginning Friday

Having a cuppa in #istanbul