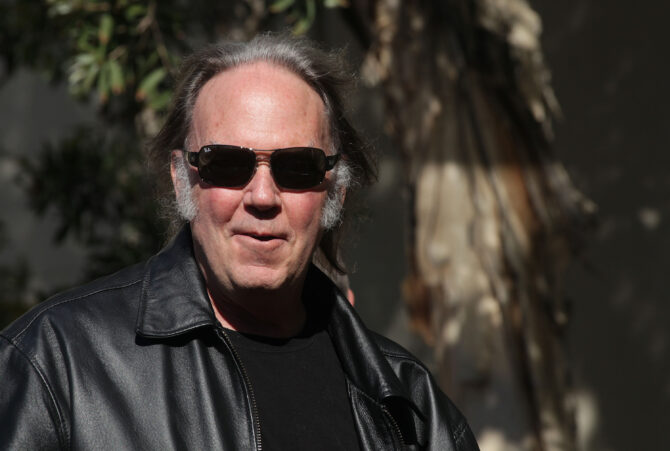 Neil Young has made national headlines since he decided last week to pull his music from Spotify. The move was prompted by the streamer continually giving podcaster Joe Rogan a platform to spread misinformation about Covid-19, and has led to several other artists following suit.

In the midst of the fallout, an old interview has resurfaced in which the famed musician used homophobic language while crassly discussing the HIV/AIDS epidemic.

In an interview with Melody Maker in 1985, Young said, “You go to a supermarket, and you see a f—ggot behind the f—kin’ cash register; you don’t want him to handle your potatoes.”

The quote is only slightly better with the full context, which many critics are leaving out of the discussion. Still, none of it ages well.

“It’s true!” Young continued. “It’s paranoid but that’s the way it is–even though it’s not just gay people, they’re taking the rap. There’s a lotta religious people, of course, who feel that this is God’s work. God’s saying, y’know, no more buttf*cking or we’re gonna getcha. I don’t know what it is. It’s natural, that’s one thing about it. It’s a living organism or virus, whatever it is. I hope they find something to stop it. It’s worse than the Killer Bees.”

The comments have sparked a whole new debate online, with supporters arguing Young has clearly evolved in the 37 years since the interview.

“Attitudes change,” wrote one commenter. “The country was WAY different in the 80’s. People were led to believe that AIDS was a gay disease. And, our elected leaders and mass media echoed that message. Gay men were seen as pariahs.

“I am a gay man who has lived through the 80’s and can say that he probably said this out of ignorance, an ignorance that was prevalent at the time.”

“1985 was a long time ago,” wrote another. “I’m guessing he has more info now, and has learned better. Plus, at that time, many folks still thought you could get HIV from someone through touch (and other now proven to be falsehoods).”

Others weren’t so quick to brush it off. “It wasn’t ‘mainstream’ to call people ‘f’ words in interviews in the 80’s,” argued another commenter. “Musicians didn’t talk like that. SOME comedians did but never to make fun of AIDS and people dying. What Young said was considered totally f*cked up even back then.”

“He was 40 years old at the time he made that comment, and hasn’t apologized for it since,” another wrote.

Young’s song “Philadelphia” — from the 1993 Jonathan Demme film of the same title that tells the story of how a lawyer fired for having AIDS attempts to vindicate himself in court — received an Academy Award nomination and Young performed the song during the Oscars ceremony in 1994.

In his 2002 biography of Neil Young, Shakey, Jimmy McDonough writes “I had found out that Young was planning on donating the proceeds from the ‘Philadelphia’ track to the Gay Men’s Health Crisis center. He acknowledged it was true but didn’t seem anxious to publicize the fact. I got the feeling there were other chartable acts I didn’t know about. ‘I’m not trying to score any social points,’ he said.”