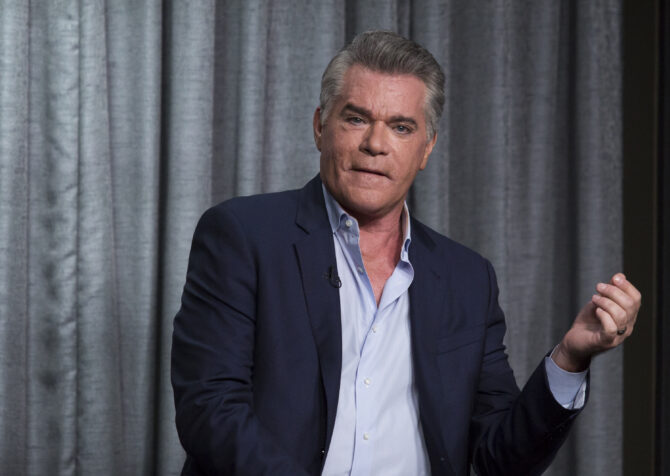 Venerable film and television actor Ray Liotta has passed away at the age of 67. RIP.

Best known for his role as Henry Hill in Martin Scorsese’s gangster movie classic, Goodfellas, Liotta has made a career out of playing wise guys, tough guys, and generally guys you just don’t want to mess around with. Despite the bruiser reputation, his work often possessed a real tenderness—perhaps it was those piercing blue eyes that could telegraph a well of emotion stirring beneath the hardened shell.

(He also, we should add, had a great sense of humor, as seen on shows like Unbreakable Kimmy Schmidt, or in his run-ins with queer icons, The Muppets)

As many fans and former colleagues take to social media to remember his talent and genuine soulfulness, let’s take a trip back to the not-too-distant past of 2016, when Liotta starred opposite another icon, Jennifer Lopez, in the NBC crime drama, Shades Of Blue, gifting us with an unexpected but welcome gay kiss we won’t soon forget.

In many ways, Shades Of Blue—which ran for three seasons from 2016 to 2018—is remembered as “that one cop show where J.Lo has curly hair.” But the series proved early on that it was willing to subvert expectations when, in its third episode, Ray Liotta’s police lieutenant Matt Wozniak kisses fellow cop Donnie Pomp (played by Michael Esper). Considering Wozniak was married to a woman, the moment came as a real shock, leaving the door open for the drama to explore the brooding character’s bisexuality, especially in relation to Wozniak’s gay son, Nate (Cameron Scoggins).

And what a kiss! Liotta and Esper don’t hold back, staring silently into each other’s eyes before they grab each other’s faces and go for it. Sure, there have been plenty of gay kisses just like it on television over the years, so it wasn’t necessarily trailblazing, but you’ve got to applaud Shades Of Blue for going there and not holding back. Not to mention, it’s pretty amazing to see an icon of “film bro” cinema like Liotta embrace the scene—and the queer role—so fully.

The moment had fans buzzing back in 2016 and, in press interviews at the time, Liotta expressed his shock at the overwhelmingly positive reaction. An ally, the actor shared with U.K. publication The Times that he supports marriage equality, saying of the kiss, “It was different. I don’t have any judgement about it.” He went on to joke, “As Robin Williams used to say: ‘Gay people, they should be unhappy too, let them get married.'”

In a separate conversation with The Wrap, Liotta revealed some of the crucial lessons he learned while filming the scene: “One is, when you know you’re gonna kiss your girlfriend, make sure you shave, because stubble hurts.” Classic wise guy.