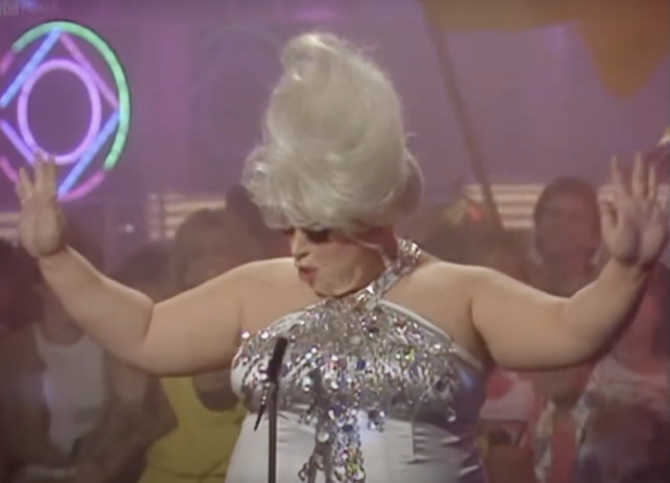 Today marks the anniversary of iconic drag performer Divine’s death. The larger-than-live queer personality passed away on March 7, 1988 at the age of 42, just three weeks after the nationwide release of her film Hairspray.

In addition to appearing in over a dozen movies during her lifetime, Divine, whose real name was Harris Glenn Milstead, released a number of studio albums and singles, as well.

Her 1984 song “You Think You’re A Man” was written by Geoff Deane, who would later write the 2005 film Kinky Boots, which would then be turned into a Broadway musical by Cyndi Lauper and Harvey Fierstein in 2013. It was originally intended for Gloria Gaynor, but ended up becoming one of Divine’s biggest hits instead.

Related: About that time Divine played a crime lord…

To promote the single, Divine appeared on Top of the Pops on July 19, 1984 in the UK. Her high energy performance reportedly resulted in “thousands” of complaints from angry (read: homophobic) viewers who were outraged by the “fat lady” their children had been exposed to that evening, calling the whole thing “disgusting” and “obscene.”

Nevertheless, “You Think You’re A Man” went on to reach the UK Top 75 chart, peaking at number 16, and it remains one of Divine’s most popular songs to this day. In addition to being covered by the band Full Frontal and singer Tim Campbell, it was featured on Queer as Folk and It’s a Sin.

While you’re here, check out the music video for her song “Walk Like A Man”, which was released in 1985 and features a sample from Donna Summer’s “I Feel Love”.